Have you played The Venture Bros. today? 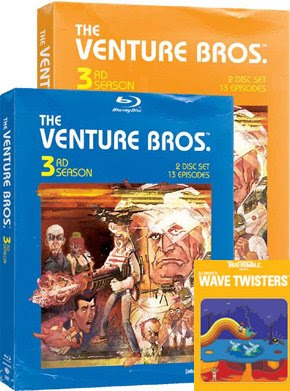 The box sets' street date is March 24. Why do I have to wait so damn long until I can finally delete last season's Venture Bros. episodes from my DVR?


Arriving at retail as a two-disc box set on both platforms for the suggested retail prices of $29.98 and $44.98, respectively, The Venture Bros. Season 3 features all 13 uncensored episodes from the show's highly popular third season and bonus material including deleted scenes and commentary. Additionally, the Blu-ray disc box set will be packaged with an exclusive CD which includes 20 tracks that comprise the full musical score from the television series' third season.

[Via TVShowsOnDVD.com]
Posted by J. John Aquino at 3:45 AM