J.J. Abrams' big-screen reimagining of the original Star Trek won't be unveiled until we're well into the next administration, so in the meantime, on the next episode of A Fistful of Soundtracks, get your Trek on with my favorite score cues from what's known as the TOS era of the Trek feature films. For the newbies, TOS stands for "Terrifyingly Obese Shatner."

Although four different men sat in the composer's chair, the epic scores of the first six Trek films were pretty consistent in quality, and that's rare to see in a long-running film series that went through many different producers, writers and directors. Even when an installment like Star Trek: The Motion Picture or Star Trek V faltered creatively, the music remained top-notch and satisfying (that's also due to the involvement of Silver Age great Jerry Goldsmith in those films).

ST:TMP contains one of my favorite Goldsmith scores, Nicholas Meyer's unequalled Star Trek II has my favorite James Horner score, Star Trek IV contains some of my favorite pieces by Leonard Rosenman, and Star Trek VI features my favorite score by Cliff Eidelman, who was touted as the next big thing in film music at the time of Trek VI's release but hasn't written anything as significant since then (unless you count The Sisterhood of the Traveling Pants).

The Star Trek IV LP was given to me as a Christmas present when I was a kid and is the first soundtrack album I ever owned. Because Rosenman recently passed away, WEB94 includes a brief tribute to Rosenman and his music.

Abrams regular Michael Giacchino is scoring the Trek reboot and has had a knack for this kind of epic material that's gone as far back as his scores for Alias and the Secret Weapons Over Normandy video game. I don't know how Giacchino feels about Gerald Fried's catchy fight theme from the old show, but I hope he does some sort of little tribute to that fight theme in his score. In Mission: Impossible III, Giacchino revived Lalo Schifrin's "The Plot" theme as a shoutout to the '60s Impossible, so I'll be a tad disappointed if he doesn't do the same with the national anthem of Decapod 10.

Abrams' goals for his Trek film sound promising. It's unlikely to be a heavy-handed and dull first movie like ST:TMP, which was nicknamed Star Trek: The Motionless Picture and Spockalypse Now because of its lackluster script and slow pace. (That must explain why the cast members wore pajamas during the movie.) The producers chose to model ST:TMP after 2001: A Space Odyssey instead of Star Wars--the movie everyone else was ripping off at the time--but imitating Kubrick was as much of a mistake as imitating Star Wars would have been. We wanted to see Kirk, Spock and McCoy wittily snipe at each other and debate over ethics and fight their way out of trouble like they often did on the '60s show, not stare silently for 10 minutes at garish visual effects. As an Everything2 review of ST:TMP notes, "Where the protagonists of the television series had been dynamic, there they were passive. Kirk & Co spent most of the film as bystanders, forced to watch things happen to them via the Enterprise's viewscreen."

The lively and textured Goldsmith score basically carries the movie. Next time you have the stones to sit through ST:TMP, watch it mainly for its score. It's that good. (Make sure the version of ST:TMP that you watch is the 2001 DVD-only Director's Edition, which doesn't quite fix the script's inadequacies--no updated effects footage ever could--but it's faster-paced than the theatrical cut.) My favorite ST:TMP score cue is the suspenseful "Spock Walk," which I didn't have time to include in WEB94. "Spock Walk" underscores the only exciting moment in ST:TMP's boring second half, the thruster-suited Spock's entrance into the innards of V'Ger. 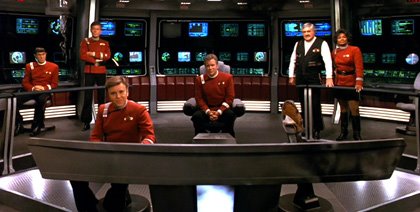 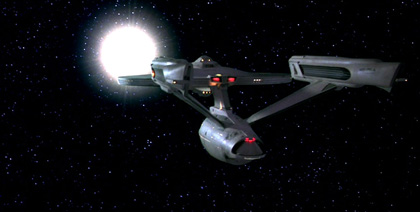 The final two tracks on the WEB94 playlist are Eidelman's "Sign Off" and "Star Trek VI Suite," the musical swan song of the classic era of the Star Trek feature films.

Speaking of music from long-running movie franchises, Amy "Cocaine's a helluva drug" Winehouse and her Back to Black producer Mark Ronson have been chosen to write and perform the theme from Quantum of Solace, the next 007 film.

Not since Garbage's "The World Is Not Enough"--Shirley Manson was born to be a Bond girl or at least the singer of a Bond theme--have I been so jazzed about the next Bond theme. One of my favorite songs last year was the Winehouse/Ronson cover of the Zutons' "Valerie," so the Quantum of Solace theme--which Winehouse and Ronson just recently put the finishing touches on--is guaranteed not to suck. 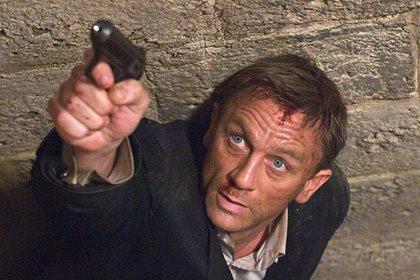 A future AFOS episode will feature all the Eon Productions 007 opening credits themes in chronological order, from the Monty Norman Orchestra's "James Bond Theme" from Dr. No to the not-yet-titled Quantum of Solace theme.

Next AFOS episode: Favorite tracks from comedy scores. The whole ep is just an excuse to play something from the Harold & Kumar Escape from Guantanamo Bay soundtrack.
Posted by J. John Aquino at 8:12 PM