They're coming to rescore you, Barbra


In 2015, the Jersey Journal interviewed guitarist Devon E. Levins, the founder of the New York band Morricone Youth, about Morricone Youth's live rescore of George Romero's Night of the Living Dead. Since 1999, the band has specialized in rock-style covers of '60s and '70s film and TV score compositions by the likes of Ennio Morricone (whom the band was named after), Lalo Schifrin and Henry Mancini. In recent years, they've also been performing live rescores of silent movies and the occasional post-silent-era work that opted for pre-existing library music cues instead of spending extra cash on recruiting a composer to write and record an original score. One such post-silent-era work was the famously ultra-low-budget Night of the Living Dead.

Yeah, that's not the kind of goblin Levins was referring to, Jersey Journal.

Levins meant Goblin, the Italian rock band that's best known for its largely synthy yet somehow timeless-sounding original scores for Dario Argento thrillers and Zombi, the European recut of Dawn of the Dead, Romero's 1978 sequel to Night of the Living Dead (some of Goblin's Zombi cues popped up in the original version of Dawn as well). One of the merits of Morricone Youth's rescore of Night--which Morricone Youth released as an EP in September after a year of performing it live, in addition to releasing an EP of their rescore of the technically impressive (but also massively racist) 1926 German animated movie The Adventures of Prince Achmed--is the way that the band's Goblin-style rescore strengthens the connective tissue between the first two Dead installments and makes the first Dead flick feel closer to the partially Goblin-scored 1978 sequel, sonically speaking.

In the Jersey Journal article, Levins is right about the old-timey and forced nature of the library music cues during Night. Except for the eerie library track Romero needle-dropped for the 1968 film's bleak ending, all those stock cues are tonally at odds with the gritty, documentary-style visual approach to horror Romero introduced with his film, an approach that mirrored the unsettling clips of hate crimes, race riots and Vietnam War combat that were emerging on news broadcasts at the time (some critics at the time found this kind of grittiness in Night to be too intense and despair-inducing for their tastes). Sure, Night is a seminal zombie genre classic that mostly holds up, but certain things have dated the film badly, like the library tracks that are straight out of 1959 (in fact, a lot of those cues previously appeared in one such 1959 B-movie, the one-time MST3K target Teenagers from Outer Space) and the fact that Romero was still trying to figure out how his zombies should react to either pain or being snuffed out before they get the chance to enjoy Sizzler's new all-you-can-grab-from-somebody's-entrails buffet. The most unintentionally funny moment of Night is an extra who does a facepalm when his zombie character is shot down, an un-zombie-like bit of behavior: 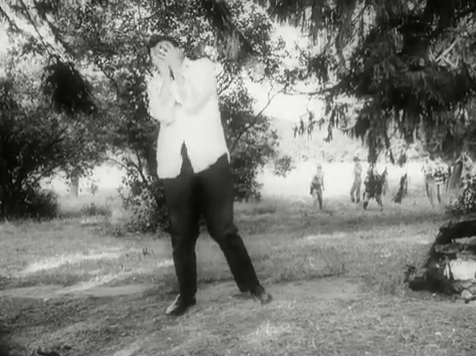 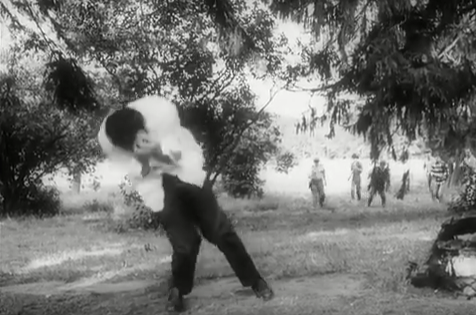 Anyway, the Morricone Youth rescore finally makes Night sound more like a 1968 film--a film that was a precursor to the intensity of Taxi Driver and the bleakness of both Chinatown and Night Moves in the following decade--than a 1959 one. Although Levins is right about the Goblin-esque elements of his band's rescore, it's also a lot twangier than how Goblin wrote its film scores, and the twangy approach actually places certain cues like "At the Gravesite" closer in spirit to late '60s spaghetti western scores by the likes of Riz Ortolani (1967's Day of Anger) and Stelvio Cipriani (1967's The Stranger Returns) than the '70s and '80s Goblin sound that was featured in Dawn.

Goblin wasn't formed until 1972, so the most Goblin-esque parts of the rescore imagine how Goblin might have sounded in 1968. The rescore often syncs up better with the action than the recycled score cues from Hideous Sun Demon and the Capitol Hi-"Q" stock music library do.

The Night rescore EP is an intriguing experiment for those of us who never liked the music during Night. Both the Night and Prince Achmed EPs are currently being marketed by Morricone Youth as ideal Christmas presents for vinyl (or digital) soundtrack album collectors. The band's Prince Achmed rescore isn't half-bad either. It's a suitably groovy musical reinterpretation of an animated Lotte Reiniger film that still dazzles visually (Prince Achmed has an oddly psychedelic look, and I wouldn't be surprised if Reiniger's film inspired Maurice Binder while he designed the Thunderball opening titles), unless the film's caricatures of Chinese and African people (not surprising because this is '20s Germany that we're talking about here) are too much of an offensive distraction for you (they're often a distraction for me).

I'm particularly fond of "Maidens"--it's like if Morphine scored a silent movie--and the sitar riffs of "Peri Banu."

According to Morricone Youth's site, the Night and Prince Achmed EPs are the first in a planned series of 15 vinyl and digital releases of rescores the band has performed live during screenings of silent-era works and midnight movies. For those who are intrigued by rescores, especially in this current age of remix culture, the two EPs are worth a listen. Now someone needs to go imagine what it would have sounded like if Morricone scored Scarface instead of Giorgio Moroder or if Alexandre Desplat of The Grand Budapest Hotel fame remained attached to Rogue One instead of getting replaced by Michael Giacchino. I'm curious about the alternate timeline where K-2SO was scored exactly like one of the countless privileged white snobs in Wes Anderson movies.
Posted by J. John Aquino at 3:05 PM