AFOS Blog Rewind: Not everyone's a critic, which was why Fox's enormously funny The Critic didn't last 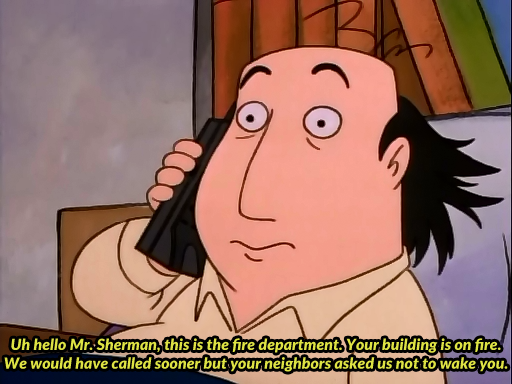 Last week, Uproxx posted a lengthy and enjoyable interview with longtime writing partners Al Jean and Mike Reiss about their short-lived but well-remembered creation, the '90s animated show The Critic. The show centered around Jay Sherman, a persnickety film critic nobody likes, except for Marty, Jay's 13-year-old son, and Margo, Jay's teenage foster sister, who both look up to Jay, and Jeremy Hawke, an easygoing Aussie B-movie star who considers Jay his best friend ever since he was the only critic who didn't trash his first movie. In the Uproxx article, Jean and Reiss recalled the main reason why The Critic lasted from only 1993 to 1995 (the new Fox network president at the time hated it) and the challenges of attempting to give Jay and the other Critic characters the same kind of revival Family Guy and Futurama experienced after they were cancelled by Fox too (three of The Critic's regular voice actors are no longer alive, and Reiss also points out that "Siskel and Ebert are dead and those kinds of shows don't exist anymore. Movie critics used to be all over TV and they used to wield great influence and they just don't"). So from March 18, 2008, here's a post about The Critic, originally posted under the title "'Now who wants to boogie with Baby '37?'"

This weekend, I was surprised to find an eight-hour ReelzChannel marathon of the short-lived animated series The Critic, James L. Brooks' second foray into animation after the success of The Simpsons. Created by Simpsons writers Al Jean and Mike Reiss, The Critic aired on ABC during its first season (1993-94) and then for its second and final season (1994-95), it went to die on Fox (where the show's "Hey! We're on Fox" gags were amusing, while on a non-Fox channel in reruns years later, uh... not so much). The show, which comes complete with Simpsonian catchphrases that never took off ("It stinks!," "Hotchie motchie!," the Chuck McCann-referencing "Hi guy!"), later enjoyed a cultish afterlife in webisode form and on both DVD and Comedy Central's animation lineup.

The ReelzChannel marathon reminded me how funny The Critic could be, though the rest of America didn't agree, including TV critics who found it difficult to warm up to the show like they had with The Simpsons. Even Matt Groening, Jean and Reiss' on-and-off-and-on-again boss, had gripes about The Critic. (The Simpsons creator opposed Brooks' idea of a Simpsons/Critic crossover show and took his name off the credits of that episode. Some of Groening's gripes are understandable. The crossover added more continuity errors to a series that was already drowning in them--in the Critic universe, the Simpsons characters were established as fictional.)

The titular loser is Jay Sherman (Jon Lovitz), the miserable host of a Manhattan-based movie review show that's constantly being tinkered with by cable network CEO Duke Phillips (Charles Napier), a Ted Turner-like chicken and waffle house magnate. While getting reacquainted with The Critic, I was struck by how the love/hate relationship between Jay and his intrusive boss seems to have been carried over in the dynamic between Liz the principled comedy writer and Jack the well-meaning but meddlesome network exec on 30 Rock (and like Duke, Jack thinks his favorite employee is gay). The big difference between Jay/Duke and Liz/Jack is that most of Jack's ideas have actually helped Liz's program The Girlie Show (Jack's hiring of movie star Tracy Jordan boosts the ratings of the rebranded TGS), while none of Duke's ideas have ever worked (one of my favorite Critic episodes involves Duke's insistence on pairing Jay with sidekicks, which range from a grizzly bear to a sassy black kid named "Lil' Shabazz").

Though it was given great time slots by both networks (ABC paired it with Home Improvement, while on Fox, it followed The Simpsons), why wasn't The Critic able to attract viewers like The Simpsons and King of the Hill did? There's a theory in a post by Jaime J. Weinman that could explain The Critic's inability to find an audience. He thinks 30 Rock is a ratings underperformer because it suffers from the same flaw that he says is also plaguing How I Met Your Mother: the central character, the one figure that the audience is supposed to identify with, is the show's weak link. (Weinman feels Liz and Ted, the "I" in How I Met Your Mother, lack presence as central characters--they're constantly overshadowed by the other characters on their respective shows--and the less patient viewers have abandoned these shows because they can't find any characteristics in the leads that they could relate to.) While I don't consider the characters of Liz or Ted to be the weak links (for me, the weak link on these ratings-addled cult shows has often been the stunt casting), I could see why Jay's irritable film critic persona could be off-putting to viewers because you know how much America loves film critics.

I also think The Critic failed to connect with viewers because of its offbeat cosmopolitan setting, which, for me, was one of the show's charms. The setting was reflected in everything from Hans Zimmer's sprightly, "Rhapsody in Blue"-inspired main title theme (an early taste of what was to come in his surprisingly enjoyable Simpsons Movie score) to the character design, a shout-out to the drawing styles of New York cartoonists like Al Hirschfeld and the New Yorker illustrators. Viewers tend to embrace animated sitcoms set in suburban neighborhoods (The Simpsons, King of the Hill, South Park, Family Guy) and avoid cartoons set in the city (The Critic, Futurama, The PJs), perhaps because the characters on these city shows have been too abrasive for their tastes, and Jay was no exception.

Here's another Weinman theory: viewers avoid darker-toned sitcoms (The Honeymooners and Brooks' own Taxi were ratings flops during their initial runs). The Critic was far from dark, but my God, Jay the adopted, divorced and luckless schlub suffered through life more often than Charlie Brown--even though he seemed to get as much tail as George Costanza.

Too bad viewers bolted because they couldn't stomach seeing those brash qualities in a prime-time cartoon. They missed out on other great elements of The Critic, like any gag involving the show's funniest character, Jay's WASPy adoptive father Franklin (Gerrit Graham), a former New York governor whose main vice while in office seemed to be cocktails rather than whores. Had The Critic continued for more than 23 episodes, I would have loved to have seen what else the writers had in store for the insane and eternally tipsy Franklin, who, like Ralph Wiggum on The Simpsons and Tracy on 30 Rock, lives in "a different and more wonderful universe than everyone around him," as the A.V. Club's Nathan Rabin once wrote about Ralph and Franklin. A couple of the secondary settings in Jay's fully realized universe could have functioned well as separate shows of their own, like the mansion where Jay's adoptive family lives or his son Marty's U.N. private school, where the kid from Easter Island can't catch a break and the African headmaster creepily laughs at his own jokes.

There was clearly more to the show than just the movie/TV/pop culture parody gags, some of which haven't aged well, while others are amazingly dead-on, like a sequence involving a musical version of The Hunchback of Notre Dame--this was two years before Disney released its animated song-and-dance version of Hunchback. (Speaking of which, the random movie/TV spoofs make more sense in the showbiz setting of The Critic than they do in the non-showbiz setting of Family Guy. My favorite Critic parody is a 007-style depiction of Fifth President James Monroe, who spits game at a damsel in distress with a Connery-esque "Welcome to the Era of Good Feelingsch.")

Critics who couldn't warm up to The Critic because they felt it lacked the heart of the earlier seasons of The Simpsons must have missed the poignant "Every Doris Has Her Day," the most Brooksian of all the Critic episodes (Brooks is credited with providing many of The Simpsons' more emotional moments). In that episode, Jay discovers a kindred spirit in his previously unfriendly, chain-smoking makeup artist Doris (the late Doris Grau, who also voiced Lunch Lady Doris on The Simpsons) and begins to think she's his birth mother. But to Jay's disappointment, DNA results prove otherwise. Now that's one juicy thread the Critic writers could have pursued if Fox hadn't killed the series: would Jay ever find his birth parents?

The series could have lasted longer had it been produced for a cable channel like IFC, which would have understood The Critic because IFC's specialty is original programming that satirizes showbiz (Greg the Bunny, The Minor Accomplishments of Jackie Woodman), and its audience consists primarily of Jay Sherman types. The Critic just had the misfortune of airing on a network that found it too crass and a network that found it too tame.