Fresh is the word: Checking in on Fresh Off the Boat

I was all set to dislike ABC's Fresh Off the Boat before its premiere. It wasn't because it was going to take celebrity chef Eddie Huang's candid and raunchy memoirs about his hip-hop-soundtracked childhood in Orlando in the '90s (which I've read only one or two excerpts of) and water down that book for network TV, which was what Huang, the show's off-screen narrator, said he was initially frustrated about while he consulted on the writing and filming of the Lynn Shelton-directed Fresh Off the Boat pilot (I wish Huang did a little more research about ABC sitcoms before he signed up to do business with ABC: someone should have reminded him it's the home of The Middle and The Goldbergs, not Louie and You're the Worst). I was all set to dislike the show for a different reason: it was going to be another goddamn story about second-generation Asian Americans dealing with identity issues, assimilation and generational differences with their elders.

As someone who's watched a shit-ton of Asian American indie movies, that kind of story was, for a long while, the only kind of Asian American indie flick that was getting made, whether it was Red Doors or American Chai. We're so underrepresented or poorly depicted in everything else in pop culture, and this shit is the best we can do on our own? It was becoming as much of a tired formula as Katherine Heigl rom-coms or "Die Hard on a boat!"--or "Die Hard in an office building!" The earnest indie drama about Asian American assimilation became so grating and hackneyed that graphic novelist Adrian Tomine spent the first five pages of Shortcomings hilariously tearing it apart.

"Why does everything have to be some big 'statement' about race? Don't any of these people just want to make a movie that's good?," grumbles Shortcomings' main character, Berkeley movie theater manager Ben Tanaka, after sitting through yet another Asian American drama about generational conflict.

My beef with the assimilation story has been more like "Can we get something else other than the assimilation story, like a story outside the family? Maybe a movie or show about an Asian American guy handling the many absurdities of the dating scene on his own? We do have lives outside the family, you know." That's why Emily Kapnek's Selfie was such a breath of fresh air--it was mostly about the love life and workplace dilemmas of John Cho's modern-day Henry Higgins, a pharmaceutical marketing whiz who gives rebranding advice to the show's social media-obsessed Eliza Doolittle counterpart, Karen Gillan's Eliza Dooley, and not once did the show insert Henry's parents into the narrative--and that's why its cancellation still stings. So after ABC deleted Selfie, I thought, "Alright, so the show I've longed to see on network TV for over a decade didn't last. I don't like the fact that you're yet another assimilation story, Fresh Off the Boat, but you better be damn well as funny as Selfie was."

Fortunately, Fresh Off the Boat is genuinely funny as it glimpses at the complexities of identity, and its slightly skewed take on the coming-of-age sitcom is what sets it apart from the overly earnest assimilation stories Ben Tanaka and I don't care for. That's mostly due to the guiding hand of showrunner Nahnatchka Khan, the veteran American Dad writer whose signature creation is Don't Trust the B---- in Apartment 23. Khan's sharply written mismatched-roommates comedy revealed James Van Der Beek to be a skilled comedic actor and featured the great unsung pairing of Krysten Ritter and Dreama Walker, who were often so hilariously expressive without dialogue that I could easily picture Ritter and Walker as silent movie comediennes, and I even wished for Khan to do an entire Don't Trust the B---- episode as a silent movie.

All I wanted from Fresh Off the Boat was for the show to retain the weirdness Khan brought to Don't Trust the B----, and it's been doing that frequently. Part of the effectiveness of the surreal gags about the hellishness of the back of the school bus Eddie (Hudson Yang) and his friends ride while pretending to be comatose in "Showdown at the Golden Saddle" is due to the episode never showing what goes on in the back of the bus, as if it's too unpleasant to show on network TV. A classmate character's obsession with an NES game based on the 1980 movie 9 to 5 is a dead-on riff on how NES games would be spun off from the strangest licensed properties, whether it was Home Alone or Wayne's World. And there's a great little scene in "Persistent Romeo" where Evan (Ian Chen), Eddie's youngest brother, screams like a little girl for what feels like two hours after he loses to Grandma Huang (Lucille Soong) during poker. I don't know if it's a reference to this '90s moment, but that would be wonderful if it were. Something about male characters screaming like little girls while their expressions remain absolutely blank always kills me (it must have killed a Fresh Off the Boat crew member too because he can be heard audibly chuckling on the set off-screen while Evan screams).

It helps that Fresh Off the Boat takes some of its stylistic cues not from All-American Girl, the last network sitcom to center on an Asian American family (not counting the TBS show Sullivan & Son), but from the often enjoyable '80s period piece Everybody Hates Chris, which itself took stylistic cues from Everybody Hates Chris co-producer Howard Gewirtz's Oliver Beene, a 2003 Fox sitcom that took place in the early '60s. I remember watching All-American Girl in the '90s and being underwhelmed by it like so many other Asian American viewers, mostly because its version of Margaret Cho--whom Huang actually turned to for advice while initially struggling with the changes that were being made to the depiction of his own life as an 11-year-old--wasn't the Margaret Cho I was familiar with from her raunchy stand-up act. The dominant creative voice on All-American Girl actually belonged not to her, but to a veteran of the lily-white Empty Nest, a huge sign that Cho's show was doomed. 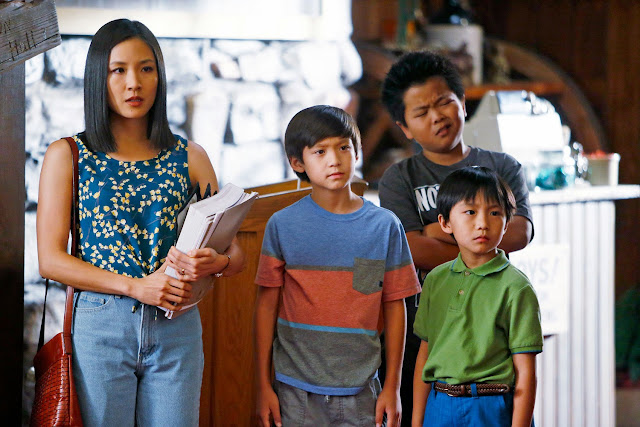 Fortunately, Fresh Off the Boat doesn't have a guy from Empty Nest in charge. Instead, it's the comedic mastermind behind Don't Trust the B----, surrounded by other writers of color like How I Met Your Mother veteran Kourtney Kang and stand-up comic Ali Wong. There wasn't a single authentic bone in All-American Girl's mad-homogenized and heavily micromanaged body, whereas Fresh Off the Boat captures many aspects of Asian American families quite well (like the Huangs' couch being covered in plastic or the Huang parents' "success perm," which isn't just a Chinese thing--it's kind of a Filipino thing as well) and gets a lot of the '90s right, whether it's the music Eddie prefers or the mom jeans look rocked by his cantankerous, Caddyshack-loving mother Jessica. Can we talk about Constance Wu for an hour? She's doing wonders with her role, turning it into something more nuanced than the Tiger Mom caricature that could have emerged in much lesser comedic hands.

Wu is actually much younger than her character, like how Nick Offerman, in real life, is much younger than his Parks and Rec alter ego Ron Swanson, but Ron is such a unique comedic creation that you can't picture anyone else but Offerman playing him had the casting gone differently (except maybe Sam Elliott, who wound up guest-starring as Ron's counterpart in Eagleton), and only Offerman could bring him to life so effectively. I feel the same way about Jessica Huang now. Despite her youth, Wu just brings a certain bearing and dimension--not to mention a certain kind of comic timing--to Jessica that I don't think any other actor could pull off. 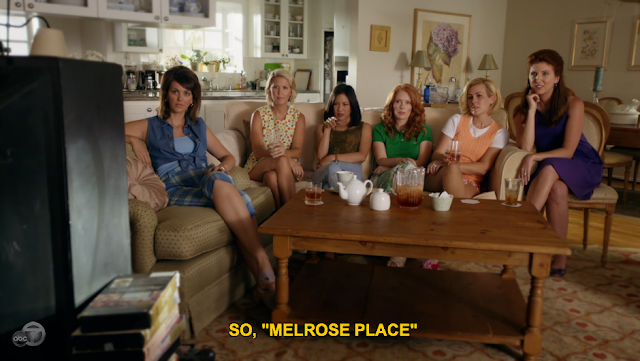 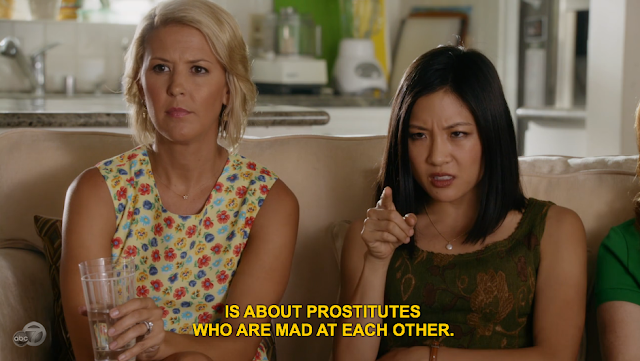 Another hero of the show--and this person isn't getting as much praise from the press as Wu--is whoever has been music-supervising Fresh Off the Boat. Securing pricey hip-hop classics by the likes of Ol' Dirty Bastard and Snoop Dogg--it's thrilling to hear on a network sitcom all these tracks I grew up with just like Eddie--was probably no easy feat. The show's '90s hip-hop soundtrack is anchored by an original theme song by Danny Brown, whom Huang himself recruited to record the theme, probably just for the thrill of saying that he slipped Danny Brown, who often makes 2 Live Crew look like the Mormon Tabernacle Choir, into an ABC family sitcom. The brief tune introduces Danny Brown to a new audience and will hopefully get those viewers to become enthralled by the Detroit rapper's storytelling skills in tracks like "Grown Up" and "25 Bucks."

But perhaps my favorite musical moment on the show so far takes place in "Showdown at the Golden Saddle," when Eddie's crush on his neighbor and babysitter Nicole (Luna Blaise, who looks like a teenage Krysten Ritter) is soundtracked by the DeBarge-sampling remix of the Notorious B.I.G./Faith Evans/Mary J. Blige tune "One More Chance." As with all the other existing songs on Fresh Off the Boat, you don't hear "One More Chance" on network TV every day. That "One More Chance" remix is like "I've Got You Under My Skin" to a certain generation. It's that smooth of a song. I could easily imagine Tom Haverford and Donna Meagle ordering bottle service at the Snakehole Lounge to the sounds of "One More Chance" at one time or another. The airing of "Showdown at the Golden Saddle" last week was a stroke of beautiful timing too: yesterday was the date of Biggie's death.

If the show hadn't been able to nab almost all those hip-hop chestnuts that have appeared so far, Fresh Off the Boat would still soar anyway. The writing is frequently sharp (in her piece "Fresh Off the Boat uses black culture to talk more candidly about Asian culture," critic Danielle Henderson put the show's unique Asian American perspective best when she said, "I can't help but feel like Fresh Off the Boat is going to help another generation of kids feel like they're a little less alone"), and the cast, with Wu and Randall Park (as Eddie's dad Louis, whose Orlando steakhouse business is actually a Filipino fried chicken joint in Glendale) as the standouts, is an enticing collection of comedy nerd favorites (Park, Paul Scheer) and always-welcome serial guest stars (Ray Wise, C.S. Lee buried under a success perm wig). For a show that's another goddamn story about second-generation Asian Americans dealing with identity issues, assimilation and generational beefs, Fresh Off the Boat is far from stale. 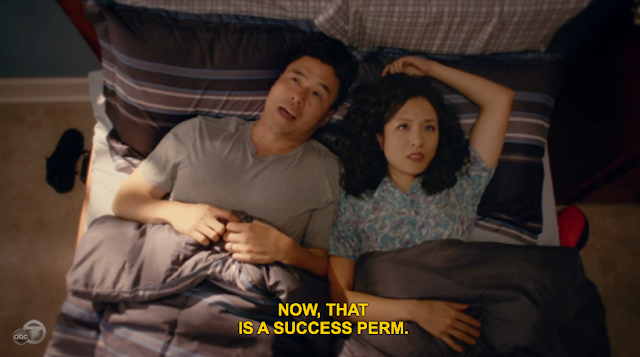