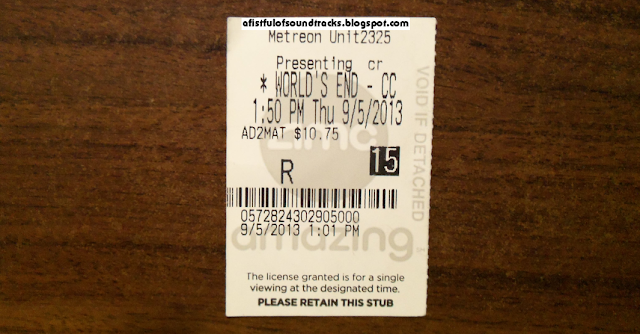 British director Edgar Wright is at the peak of his comedic filmmaking powers in 2013's The World's End, the third and final film in the Cornetto trilogy he co-wrote with Simon Pegg, the star of Wright's groundbreaking sitcom Spaced. Each film in the trilogy is a standalone piece--none of them take place in the same universe--but they all have a bunch of things in common: a Cornetto ice cream treat (a favorite hangover cure of Wright's) always makes a cameo appearance, hence the trilogy's unofficial name Cornetto; Wright reuses several actors; Pegg and his old Spaced co-star Nick Frost always play a pair of friends who are grappling with either the fear of losing their identity or being forced to let go of their adolescence; a fence jump always goes awry; and a seemingly tired genre gets revitalized in the inventive hands of Pegg and Wright each time.

The first Cornetto film, 2004's Shaun of the Dead, expanded upon Pegg and Wright's obsession with George Romero flicks from an early Spaced episode, and the result--a Romero flick with bumbling, hungover Crouch End blokes as the heroes--is still my favorite zombie movie ever. The second Cornetto film, 2007's Hot Fuzz, took Joel Silver and Jerry Bruckheimer cop flicks from America and amusingly tried to wedge the much more mundane reality of British policing into the body of one of those over-the-top cop flicks. Frequently described as "Lethal Weapon in Somerset," Hot Fuzz is not like any other action genre spoof. It's full of humor about fascism, conformity (a theme that resurfaces in The World's End), British genteelness and Grand Guignol violence that's often smarter than the average hacky "hey, let's just reference this recent movie and that recent movie and then call it a day" Friedberg/Seltzer spoof film. Hot Fuzz's genuine affection for American action flicks also elevates Wright's film above action genre spoofs that harbor contempt for the films they're parodying, much like how Shaun's affection for Romero flicks was key to making that film so appealing. 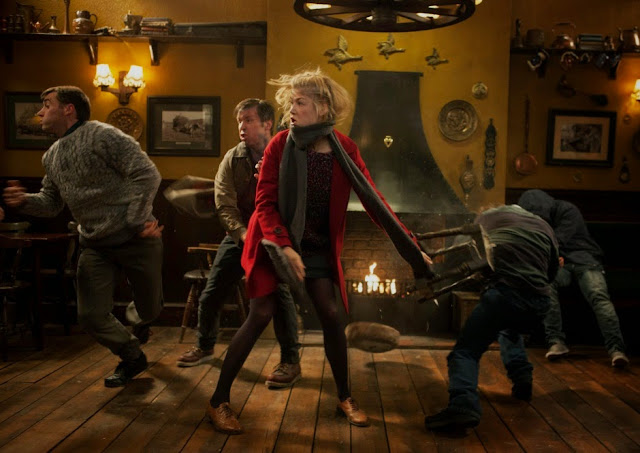 The World's End is more ambitious than the other two Cornetto films and juggles several ideas at once: it's a school reunion comedy about the dangers of nostalgia (set not at an actual class reunion but at a pub crawl Gary King, Pegg's immature alcoholic character, failed to finish as a teen and wants to finally finish with his estranged, now-teetotal friends), an addiction drama, an alien invasion flick and a critique of gentrification, or as Paddy Considine's character calls it, "Starbucking." In lesser hands, this all could have turned into a hot mess--an unwieldy, overly busy third movie that, like so many other third movies in a series, strains to juggle all the ideas running through Pegg and Wright's heads--but like the other two Cornetto films, The World's End is so tightly constructed by Pegg and Wright that the disparate components mesh beautifully and the seams never show.

When the comedic sci-fi action gives way for a scene straight out of an addiction drama, the dramatic scene doesn't feel out of place. Speaking of which, The World's End and Flight would make for a great double bill about alcoholics in denial. But why do the on-the-nose existing songs--particularly Saint Etienne's "Join Our Club" and The Doors' "Alabama Song (Whisky Bar)" in one great marriage of song and scene, due to the actors walking in step and drinking in time to the Doors tune as it was being blasted on the set--work so well for The World's End, while the on-the-nose existing songs don't work as well for Flight? That's because with the exception of the Soup Dragons' overplayed and annoying cover of the Rolling Stones' "I'm Free" and Primal Scream's '90s advertising staple "Loaded," neither of Wright and music supervisor Nick Angel's selections, which are mostly from the late '80s/early '90s era of Britrock, are tunes I've heard a million times before in movies or on TV, like Flight's overplayed choices of "Gimme Shelter" and "Sympathy for the Devil."

The original score by Gravity composer Steven Price is equally effective. My favorite moments of Price's score, which can be heard during the AFOS weekend block "Hall H" and "AFOS Prime," are textural rather than tuneful. They all involve cell phone interference sound FX, which represents the Network, the extraterrestrial collective of gentrifiers behind the gradual robot invasion of the friends' former hometown of Newton Haven, as well as all the technological advances on Earth from the early '90s to 2013 (that means Steve Jobs was a robot, which explains all those black-turtleneck-and-mom-jeans ensembles), and those advances are a huge part of the Network's strategy of seducing the smartphone zombies of the human population into getting rid of their humanity and becoming robots, or "blanks." The interference audio first appears in Price's score when Gary accidentally decapitates the teenage blank in the restroom. Never has cell phone interference sounded so menacing. After Black Mirror and the Network scenes in The World's End, the British are proving to be the craftiest satirists when it comes to material about how smartphone or tablet addiction is causing society to become even more soulless than it was before.

The result of Pegg and Wright's skills with meshing disparate components--and making inspired use of little things like mobile interference audio--is the most entertaining and clever critique of gentrification ever made. It's also the only gentrification satire to involve rousing and dazzlingly staged fight scenes where humans decapitate with their bare hands their blank adversaries and pulverize them with whatever weapon they can find, whether it's a pair of pub stools or the blanks' own torn-off limbs (the terrific World's End fight choreography was done by Scott Pilgrim vs. the World and Kingsman: The Secret Service stunt coordinator Brad Allan, a.k.a. the short white guy Jackie Chan fought during Gorgeous).

The film is so packed with detail that you pick up something new in each viewing. For instance, while watching The World's End for the fourth time in preparation for today's edition of Throwback Thursday, I switched on Pegg and Wright's Blu-ray audio commentary and learned that the film's school disco sequence--in which the Network attempts to lure Gary and his friends into becoming blanks by bringing back a trio of hot girls they liked who were known collectively as "the Marmalade Sandwich" and have eerily not aged a day--is based on an actual clubbing phenomenon. I didn't even know this was a thing in England--women get paid to dance in schoolgirl uniforms, which Pegg and Wright both find to be rather creepy as a male fantasy--and after listening to the commentrak, I received a crash course in school discos from a 2002 Guardian article about the then-new "formula of uniforms, booze and tacky tunes."

In The World's End, Wright didn't just revitalize the old sci-fi trope of your friends and neighbors getting replaced by creepy duplicates by brilliantly linking it to the horrors of gentrification. He also revitalized the midlife crisis comedy, taking it back from the Wild Hogses and Old Dogses of the world. A pre-Gone Girl Rosamund Pike does wonders with what little screen time she has--she was pregnant during filming--in the role of Sam, the lone female in Gary's circle of friends (both Pike's delivery of "What happened to you?" to Pegg in the bathroom and her comedic gasp after first seeing Pegg decapitate a female blank are sublime bits of acting), while Pegg and Frost, who switched the roles they had in Shaun and Fuzz so that Frost played the more responsible half of the duo this time, show remarkable range when their characters' respective midlife crises take a turn for the dramatic. Speaking of midlife crisis movies, why do so many SNL alums, whether it's Billy Crystal or Adam Sandler, star in the same old goddamn movie about a middle-aged guy who has to learn to be a better dad? It's why my favorite Billy Crystal movie remains the not-so-maudlin Running Scared, and it's also partly why Anchorman 2, with its "Ron needs to be a better dad" subplot, isn't as consistently funny as its predecessor. 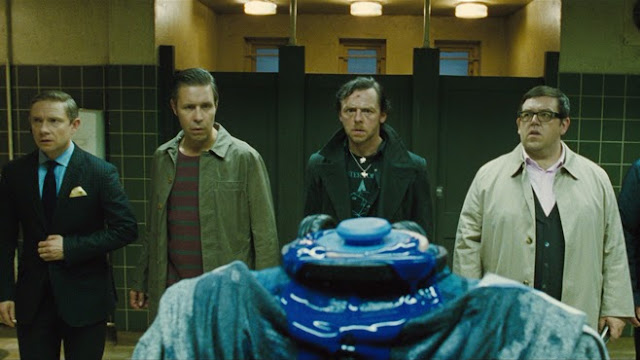