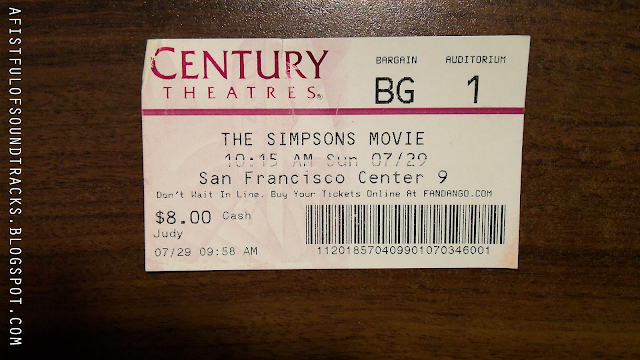 Throwback Thursday begins today, the first day of the new year, on the AFOS blog. Every Thursday in 2015, I'll be randomly pulling out from my desk cabinet--with my eyes closed--a movie ticket I saved. Then I'll discuss the movie on the ticket and maybe a little bit of its score, which might be now streaming on AFOS.

Much of why 2007's The Simpsons Movie succeeds as both a Simpsons story and a movie is because the movie's writers, a murderers' row of veteran Simpsons scribes (including reclusive former Simpsons writer John Swartzwelder), didn't recycle too much material from its TV counterpart like one of the first genuine blockbusters based on a TV show, 1979's Star Trek: The Motion Picture, so boringly did. Sure, longtime Simpsons gags like Homer choking Bart, the chalkboard gag during the TV version's opening titles and Mr. Burns releasing the hounds are revisited in the movie, as is the light drama of the marital challenges Marge must deal with while living with the perpetually lazy man-child that is Homer, a thread that's been a part of the long-running animated show since 1990's "Life on the Fast Lane." But not once does The Simpsons Movie feel like a tired rehash of the show's greatest hits in the same way that Star Trek: TMP was a rehash of Kirk's battle of wits with a rogue space probe in the classic Trek episode "The Changeling"--or that many Simpsons episodes after season 8 (the show's last consistently great season) have been rehashes of plots from earlier episodes.

It helps that the story in The Simpsons Movie, which FXX included as part of the unprecedented 12-day Simpsons marathon that revived media interest in the show last summer, is both a story that The Simpsons, despite its post-season 8 habits of repetition and derivativeness, hadn't previously done and an ideal one for the scope of the big screen: Homer's clueless treatment of the environment gets Springfield into trouble with the EPA. But when the agency intervenes and makes an already crummy town an even crummier existence for the town's citizens--Simpsons creator Matt Groening and his fellow Simpsons Movie screenwriters enclosed an entire town in a giant dome two years before Stephen King did the same in his novel Under the Dome, which King actually first tried to write back in the '70s--an exiled, on-the-lam Homer must undo the damage he's done and save Springfield. Another bit of storytelling in the movie that the show hadn't done before was a surprisingly affecting subplot where Bart, tired once again of Homer's antics, considers adopting the kindly and deeply religious Flanders as his new father figure. Screw all those Squishees, Buzz Colas and Duff energy drinks Simpsons fans flocked to 7-Eleven for when the convenience store chain temporarily converted some of its stores into Kwik-E-Marts to promote The Simpsons Movie. What I really wanted more than any of those items was the cup of cocoa Flanders makes for Bart.

Both longtime Simpsons episode director David Silverman, who directed The Simpsons Movie, and the movie's writers clearly wanted to craft a large-scale comedic blockbuster in the mold of The Incredibles, Galaxy Quest and Ghostbusters (in fact, The Simpsons Movie's chief villain, voiced by frequent Simpsons guest star Albert Brooks, is an EPA employee, much like the main antagonist in Ghostbusters). They largely succeeded at crafting such a blockbuster. They went bigger and bolder with the action and the humor (many of my favorite sight gags in the movie, like the wide shot of the churchgoers in Rev. Lovejoy's parish and the customers in Moe's Tavern switching places, make clever use of the widescreen, thanks to Silverman being inspired by the widescreen compositions of It's a Mad, Mad, Mad, Mad World and Bad Day at Black Rock), but without neglecting the irreverence and sharp social satire of many of the show's funniest half-hours, whether it's 1997's "The Itchy & Scratchy & Poochie Show" or "Homer Badman," the 1994 episode that, in one of my favorite Simpsons sight gags, turned Gentle Ben into a daytime talk show host. A great example of The Simpsons Movie's sharp social satire is an eerily prescient gag about NSA surveillance of phone calls, which is especially eerie and funny nowadays due to the NSA scandal. 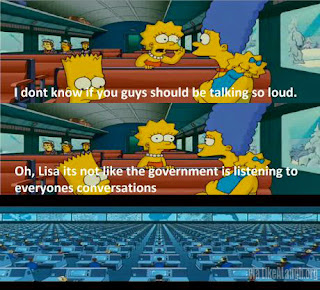 Moments like that NSA scene or the church and bar gag bring us back to why we fell in love with The Simpsons in the first place and why we still catch the show on Fox from time to time, despite its many post-season 8 missteps, whether it's the show inanely revealing Principal Skinner to be an imposter or more recently, the Comic Book Guy getting married to a one-dimensional, clichéd-as-fuck Japanese geek girl (an ugly and unattractive white guy hooking up with a hot Asian woman: yeah, I haven't seen that before) or the show's bizarre attachment to Hank Azaria's increasingly dated character of Apu. That character really ought to be retired from the show ever since Simpsons fan Hari Kondabolu sparked an insightful discussion about why The Simpsons' primary Indian character is a tiresome stereotype and a "weird relic from another era" when his humorous Totally Biased with W. Kamau Bell rant about Apu went viral ("A white guy doing an impression of a white guy making fun of my father! If I saw Hank Azaria do that voice at a party, I would kick the shit out of him!"), and Azaria surprisingly agreed with Kondabolu's criticisms.

The Simpsons Movie is as close as Simpsons co-executive producer James L. Brooks--who, outside of The Simpsons, is best known for smaller-scale, character-driven fare like The Mary Tyler Moore Show, Taxi, Broadcast News and As Good as It Gets--has gotten to making a crowd-pleasing action comedy. Brooks had more creative input in The Simpsons Movie than in more recent seasons of the show: for instance, he chose Hans Zimmer, his musical collaborator from the 1994 fiasco I'll Do Anything, As Good as It Gets and Spanglish, over longtime Simpsons series composer Alf Clausen for the task of composing the movie's score. Zimmer took Danny Elfman's Simpsons theme and etched out of it a charming new motif for Homer, the movie's most significant and memorable composition that's not "Spider-Pig." While I would have wanted to hear Clausen work his usual magic on The Simpsons Movie, Zimmer did a solid job musically bringing the characters to the big screen. (By the way, one Simpsons character who didn't make that jump to the big screen and should have was Rainier Wolfcastle, the star of the hilariously over-the-top McBain action flicks the Simpsons were frequently seen watching in the show's earlier seasons. The absence of McBain, a character I would have loved to have seen on the big screen, is the movie's biggest misstep. Rainier was replaced in the movie by a presidential version of the action star Rainier was a parody of, Arnold Schwarzenegger, voiced not by the former Cully-forn-ya governor himself but by Rainier's usual alter ego Harry Shearer.)

Brooks also directed the movie's voice actor recording sessions, something he hadn't done since The Simpsons' earlier seasons. His input, which veteran Simpsons writer Jon Vitti once noted was crucial in making the beloved 1991 episode "Lisa's Substitute" resonate with viewers, is most evident in the movie's most emotional moments, particularly a videotaped farewell message from Julie Kavner's quietly anguished Marge to Homer. "We were really trying to get to a woman who is completely broken and her spirit is defeated. I got there I guess by breaking the actress' spirit. She worked so hard at it and she wanted it to be as good and that's also a big impact Jim had on that whole scene," said Simpsons Movie co-writer Mike Scully to the Canadian site MoviesOnline in 2007. Kavner reportedly did between 100 and 150 takes for Marge's video message scene. The take that was used in the movie is perhaps her most sublime moment as a voice actor. 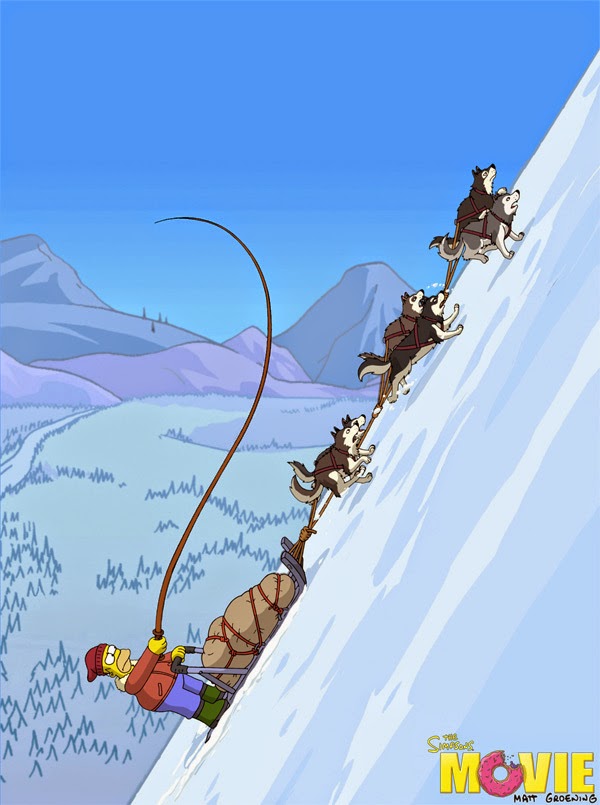 The perfectionism Silverman, Brooks and the writers aimed for in The Simpsons Movie's voice acting was also evident in the movie's outstanding animation work, which was divided among four different studios, including Film Roman, the primary animation studio for The Simpsons since its fourth season. Groening grumbled in 2013 that "[the movie] took us four years [to make] and it killed us." So it's unlikely we'll ever get that Simpsons Movie sequel Maggie was hinting at in the movie's end credits. But if the Simpsons characters' appearances on the big screen are limited to terrific theatrical shorts like 2012's Oscar-nominated Maggie solo short "The Longest Daycare," which Silverman also directed, then I don't mind the lack of a second Simpsons feature film.

"I can't believe we're paying to see something we get on TV for free. If you ask me, everybody in this theater is a giant sucker, especially you!," says Homer from his movie theater seat as he breaks the fourth wall at the start of the movie. Yes, Homer, you're a bit right. All of us who flocked to The Simpsons Movie in the theaters back in the summer of 2007 were giant suckers. But the still-funny Simpsons Movie is hardly a sham.

Selections from Hans Zimmer's Simpsons Movie score can be heard during the animation music block "Brokedown Merry-Go-Round," weekdays at 2pm Pacific on AFOS.