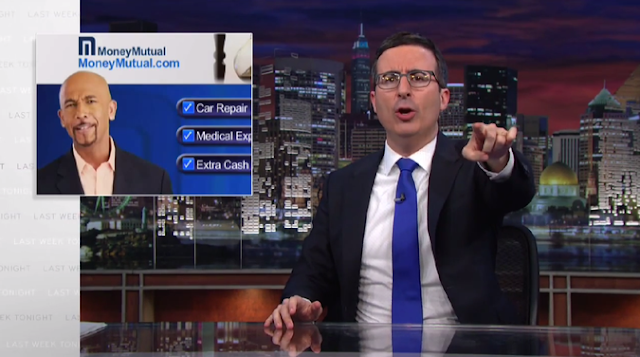 My favorite monthly section in old Source magazine issues was "Hip-Hop Quotables," in which the Source editors printed out their favorite new rap verse of the month, from the first bar to the last. "Tip-Top Quotables," which I've named after that Source section, is a collection of my favorite quotes of the week from anywhere, whether it's a recent TV show or a new rap verse. "TTQ" won't appear on this blog every week. It'll appear whenever the fuck I feel like it.

* "That's right: some payday lenders are currently dressing themselves up as Native Americans. I thought only Johnny Depp was allowed to do that!"--Last Week Tonight's John Oliver

* "Perfectly placed in a set at a bar's dance night, it will just about burn the place down as sweaty drunk people go absolutely fucking nuts over the Purple One's coos and weird chatter about that 'Electric word, life.' And while Prince is certainly not perfect, though he might think he is, 'Let's Go Crazy,' well, it's as perfect as a song can be."--the A.V. Club's Marah Eakin on "Let's Go Crazy" from Purple Rain

* "And it is a hip-hop generation that is being stopped and harassed. They are being targeted and forced to carry the weight of assumptions heaped onto them. Just because the music they listen to carries violent themes doesn't mean that they do."--Stephen A. Crockett Jr., The Root, "Rage Is the Right Response to What Happened in Ferguson"

* "When corporations refuse to protect their employees from harassment through cultural, bureaucratic, and technological failures, they not only enable this sort of specialized abuse but contribute to it. It would be easy—too easy—for people to dismiss this sexist-trolling of Jezebel as the same problems and roadblocks dealt with by any other Gawker site. But, no, the reality is that this abuse is not the same. If companies that publish the writing of authors who disproportionately experience hatred and harassment want to address those issues ethically and according to need, they cannot do so simply by addressing them 'equally'—by asking them, as Jezebel has tacitly been asked, to work within a technological framework that taxes and punishes them significantly more."--Laura Hudson, Wired, "How Indifferent Corporations Help Sexist Internet Trolls Thrive"

* "Bacall is terrified of her first movie role. She can barely hold a match to light her cigarette without trembling like a leaf. In take after take, she tilts her chin downward, burying it into her chest to steady her nerves, while lifting her eyes up—a pose that manages to convey both sexiness and street smarts. It will later be called 'The Look.' Watching the movie, you would never guess she is anything other than defiant and confident. She’s hypnotic."--EW film critic Chris Nashawaty, discussing the late Lauren Bacall's breakout performance in To Have and Have Not

* "We watched the show together every week. And for those thirty minutes, my grandmother and I communicated in a way we couldn't otherwise—through our shared laughter and understanding that what we were witnessing was a phenomenal talent who transcended things like language and culture."--playwright Philip W. Chung, recalling how the late Robin Williams' antics on Mork & Mindy broke the language barrier between his grandmother, who spoke no English, and himself (he spoke barely any Korean)

* "You know, Alan Menken wrote a beautiful score for Aladdin, and he wrote score for the Genie's bits, too. But here's what happened: When we got on the dubbing stage, Alan realized that the score fought Robin's comedy rhythms. It was like two sets of rhythms that you were trying to listen to. So in many cases, we diminished that score when Robin was going to town—or just didn't have it altogether—and instead let his voice provide the rhythm. Comedy is a very delicate thing a lot of the time, and a factor like that can make a huge difference as to whether or not you're laughing."--Aladdin animator Eric Goldberg, recalling the trickiness of finding the right kind of score music to accompany Williams' voice work

* "Comedians can be a sad bunch, you know. You know what's the saying? Ignorance is bliss. So if ignorance is bliss, what's the opposite of ignorance? Must not be bliss. And your job as a comedian, you know, is basically to notice everything. And the better the comedian, the more aware he or she is of the world around them. So you know, it can be not a happy place. Sometimes you can have too much information. Sometimes you can know too much. So no, I was not, I'm never shocked at a comedian dealing with depression."--Chris Rock, explaining to ABC News why he thinks so many comedians suffer from severe depression, which Williams struggled with


* "It's a role that showcases Williams' underappreciated capacity for nuance — the scene in which he's being comforted by a total stranger and can't stop himself from giggling at the absurdity, a reaction the woman he's talking to keeps mistaking for tears, passing him tissues. Or like this scene from the end (mild spoilers!), in which his face conveys such a quicksilver mix of sadness, regret, resignation, and the slightest touch of mischief. That clip doesn't include the lines that follow, in voiceover, as the soundtrack kicks off the perfect song and a callback to earlier in the film: 'I used to think the worst thing in life was to end up all alone. It's not. The worse thing in life is ending up with people who make you feel all alone.' It's an observation to break your heart, but the sequence that it's a part of is filled with such complex but exhilarated joy and mourning all at once. It's the kind of role Williams could pull off so well. God, he'll be missed."--film writer Alison Willmore, explaining why the 2009 indie World's Greatest Dad contains her favorite Williams performance (it also happens to be my favorite non-genie performance of his)

* "There will be much celebration, in the coming weeks and months, of Robin Williams' life and career. But perhaps the best tribute to him would be if we all reached out to the troubled people in our lives and let them know that we are here for them. Because Robin Williams was there for us."--Paul F. Tompkins
Posted by J. John Aquino at 7:15 AM