5. Mr. Sunshine (Rob Cairns? Matthew Perry's musician dad? Anyone? Anyone? Bueller?)
The broadcast networks' elimination of theme songs from most of their programming is a trend that depresses veteran TV theme composers like Happy Days and Wonder Woman theme maestro Charles Fox, who briefly expressed his displeasure during a recent interview on the podcast TV Confidential. But when a quick and minimalist theme like the one that opened Matthew Perry's short-lived single-camera comedy Mr. Sunshine makes every one of its five seconds count--it sublimely nailed the sardonic tone of the title character in just three words--maybe these skimpy themes on the broadcast networks aren't so awful (plus non-commercial HBO, which doesn't have to worry about the advertisers that are partially to blame for theme songs becoming an endangered species, is keeping the art form alive, as you'll see later).

4. Lights Out (Thwak! Music)
I'm glad the crew behind this short-lived FX boxing drama didn't go with "Lights Out" by Santigold (a sweet tune, by the way, but it would have been too on-the-nose) and opted for something original and appropriately brash and brassy a la The J.B.'s to open their show.

3. American Horror Story (César Dávila-Irizarry and Charlie Clouser)
If creepy old-timey photos of long-dead babies and creepier split-second images of pickled remains of dead babies or fetuses are your thing, then you're going to get a kick out of the American Horror Story opening title sequence by famed Se7en title designer Kyle Cooper. The rest of us find the titles unsettling to watch. I actually often turn my head away from the screen when the titles begin. They're accompanied by an eerie and effective industrial theme by sound designer César Dávila-Irizarry and Saw series composer and former Nine Inch Nails member Charlie Clouser. Together, the titles and the Dávila-Irizarry/Clouser theme are the only genuinely scary part of American Horror Story.

2. Game of Thrones (Ramin Djawadi)
No other current opening title sequence on TV screams epic like the opening titles of Game of Thrones, the screen version of George R.R. Martin's A Song of Ice and Fire novels. Dig that animated map that changes every week and helps bring newbies who were previously unfamiliar with Martin's labyrinthine creation up to speed.

On Twitter, I said I'd like to see another equally ambitious show get the Game of Thrones opening titles map treatment. 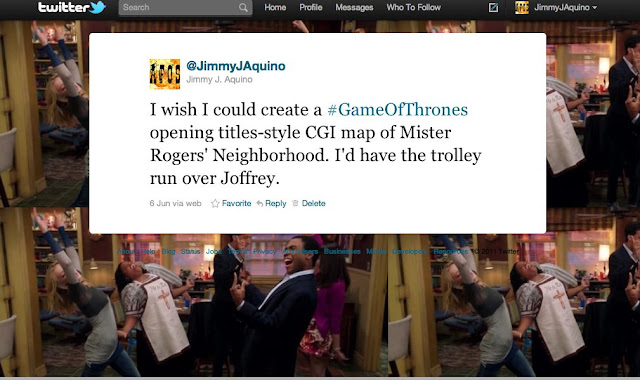 It's hard to imagine the Game of Thrones titles without Prison Break composer Ramin Djawadi's imposing and catchy theme, but had Shakespeare in Love and '90s Prime Suspect composer Stephen Warbeck, who was originally hired to score Game of Thrones, not quit the show about 10 weeks before it premiered, we'd be hearing Warbeck's score during the titles instead. Would Warbeck's composition have spawned a gazillion different cover versions on YouTube like Djawadi's instrumental has?

Of course, this nearly two-minute theme comes from a show that's on non-commercial HBO, where showrunners are given more creative freedom and TV themes are allowed to breathe. Besides its length, one other thing I like about the main title theme is how it's used by Djawadi throughout the first season to represent the character of preteen tomboy Arya Stark (Maisie Williams).

One of my favorite first-season moments, Arya's first fencing lesson with tough, Debbie Allen-on-Fame-ish instructor Syrio Forel (Milos Yeromelou), prominently features Arya's theme, which sounds like a fetal version of the main title theme (on Varèse Sarabande's Game of Thrones score album, Arya's theme pops up during track 23, "The Pointy End," which can be heard during "Assorted Fistful" on A Fistful of Soundtracks). It reminds me of how David Arnold rearranged Monty Norman's "James Bond Theme" in Casino Royale so that what we heard was a fetal version of the theme as the inexperienced Bond began his first double-0 assignment, and then in bits and pieces, Arnold developed this "He's Bond, But He's Not Quite There Yet" theme into something more familiar-sounding as Bond evolved into the untrusting and more disciplined double-0 who coldly tells M that "the bitch is dead" and confidently introduces himself for the first time as "Bond, James Bond" at the end of the film.

Does the link between Arya and the main title theme indicate that Arya will grow up to become a heroic soldier like her now-dead father Ned? (I've never read any of the Song of Ice and Fire novels and don't plan to do so. I don't want to know what happens in the novels. Insert MADtv Vancome Lady-style "La la la la la la..." and covering of ears here.)

1. Hell on Wheels (Gustavo Santaolalla)
The Game of Thrones theme is terrific, but it doesn't cause my hands to drum along to the percussion like Argentine musician Gustavo Santaolalla's standout main title theme for the AMC western Hell on Wheels does. The Brokeback Mountain composer's sole musical contribution to Hell on Wheels (the rest of the show is scored by Kevin Kiner) makes me wish the Mexican instrumental rock duo Rodrigo y Gabriela would also take a stab at the western genre after they helped score the most recent Pirates of the Caribbean sequel.

It was nice to hear the Santaolalla theme given a full statement during Cheyenne warrior Pawnee Killer's race on horseback against railroad magnate Thomas Durant's train in this week's "Pride, Pomp and Circumstance" episode. But otherwise, Hell on Wheels is still kind of a slog (like the annoying glut of Republican debate footage that's currently on TV, portions of the Hell on Wheels pilot put me to sleep). That's too bad because I'm interested in how the show depicts Joseph Black Moon (Eddie Spears), a Cheyenne member who defied his father Chief Many Horses (Wes Studi) and converted to Christianity. Speaking of which, I want to see someone make a western series told from an Indian point of view for a change. Is Ry Cooder busy?