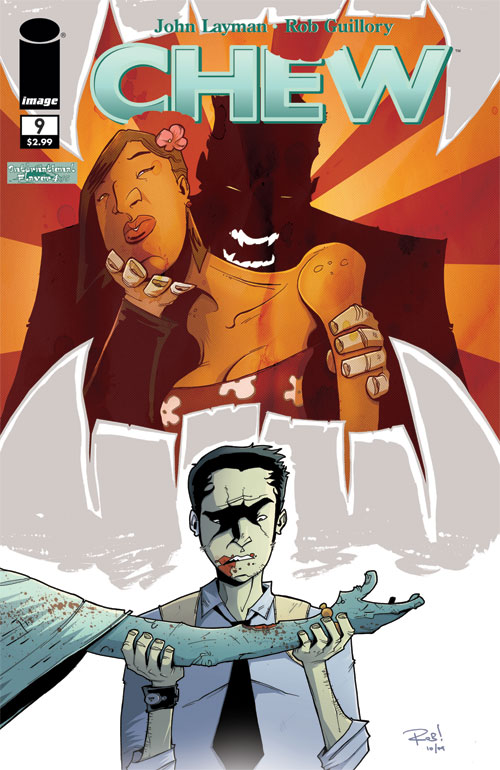 Last year, music critic/blogger Oliver Wang invited his readers to post lists of six films that they think would best serve as an intro to Asian American cinema if someone asked, "What the hell is Asian American cinema? School me." Chan Is Missing, a Wayne Wang indie comedy that broke new ground in 1982 for its multilayered portrayal of the frequently stereotyped Chinese American community, showed up on several readers' lists.

It took a long time for the APA-dominated comics industry to catch up to Chan Is Missing and other equally groundbreaking '80s and early '90s indie films by APA directors. When I was a teen, I frequently thought, "Why aren't all these Asian creators doing comics about themselves or rather, about us? Okay, there's Xombi by a pair of non-Asians over at Milestone Media. But that's it? (NOTE: I didn't know Lynda Barry was one-quarter Filipina at the time.) Are these Asian guys whitewashed or something?"

The lack of APA protagonists was one of many reasons why I lost interest in comics and didn't become a regular reader again until the mid-2000s (mainly because of the strong writing in titles like Y: The Last Man and Gotham Central). It was a great time to come back to comics because that part of the decade saw several APA creators unleashing graphic novels with richly crafted APA characters that were on a par with Chan Is Missing.

I'm looking forward to seeing more APA comics or graphic novels. I was even involved in one of them (Secret Identities: The Asian American Superhero Anthology). Whether they're semi-autobiographical works that examine APA identity issues or post-racial escapist fare that doesn't address any of those issues at all (but it doesn't matter because look, yo, it's an APA brother as the hero!), here, in alphabetical order, are six essential APA comics or graphic novels, just in time for APA Heritage Month. 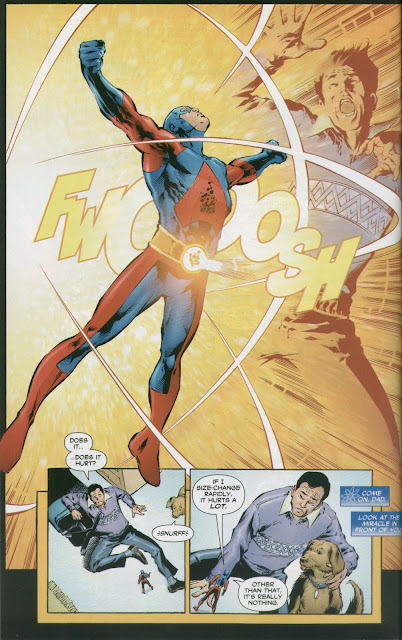 1. The All-New Atom (writer: Gail Simone/illustrators: various, 2006-08)
DC's most recent revival of their microscopic superhero only lasted 25 issues, but its wisecracking lead, Ray Palmer's Hong Kong-born protege and successor Ryan Choi, still suits up as the Atom in other DC titles and even the Batman: The Brave and the Bold animated series (some fans of the Choi incarnation fear that after these post-cancellation appearances, the character, whose series tanked sales-wise, might get killed off someday). For this offbeat series, which was partially created by Grant Morrison and collected in four trade paperback volumes, Birds of Prey and Wonder Woman writer Simone set up a nifty and inventive premise that raises the question "Do superheroes ever think about the destruction they leave in their wake?" The shrinking technology that Professor Palmer made use of as the Atom has left some nasty side effects on the physics of his hometown Ivy Town and turned it into a Sunnydale-like hotbed of paranormal activity. After his professor mentor mysteriously goes AWOL, Choi defies the wishes of his Hardass Asian Father and assumes the Atom mantle to protect Ivy Town from monsters, size-changing serial killers and a microscopic extraterrestrial warrior race that lives inside Choi's dog Copernicus. Oh yeah, and there's a 30-foot-tall naked red-haired chick (if the My Life in Miniature arc ever becomes a movie, naked Giganta ought to be played by Christina Hendricks--and somewhere, a nerd's pants explode). 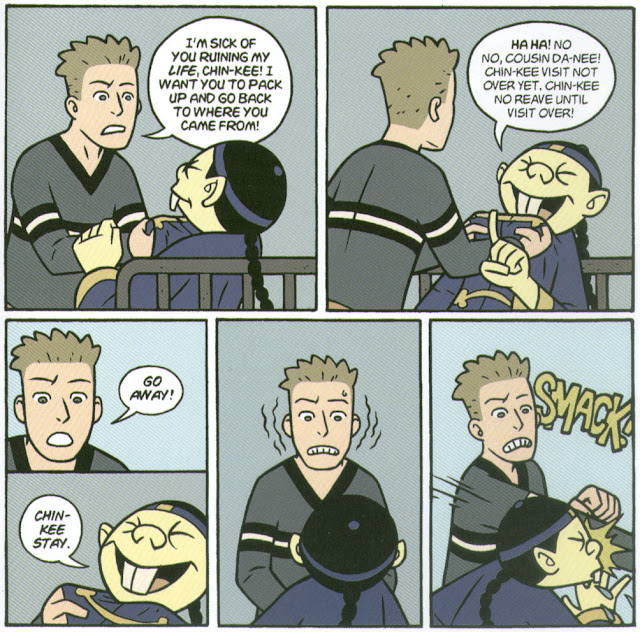 2. American Born Chinese (writer/illustrator: Gene Luen Yang, 2006)
Colored superbly by artist Lark Pien, Yang's absorbing third novel centers on a whitewashed Chinese junior high-schooler who's filled with enough self-hatred to fuel an Esther Ku routine, and it ties the kid's struggles beautifully to the Chinese legend of the impish and heroic Monkey King. As a kid who drew his own comics, Yang was prone to some of the same kinds of whitewashed behavior that his novel depicts. He would doodle bucktoothed caricatures of his own people, without realizing they're as offensive as the Asian-bashing cartoons he would later find objectionable as a grown-up (he named the school that's a source of torment for the title character after one of these racist cartoonists, Pat Oliphant). American Born Chinese's bucktoothed Cousin Chin-Kee character was a way for the Bay Area native to exorcise that personal demon (much like Lynda Barry, whom I'll get to later). The confessional feel of American Born Chinese is quite Catholic--Yang himself is a devout Catholic--and the candor with which he tackles self-hatred and identity recalls the earlier and more personal works of another guilt-ridden Catholic, Martin Scorsese. 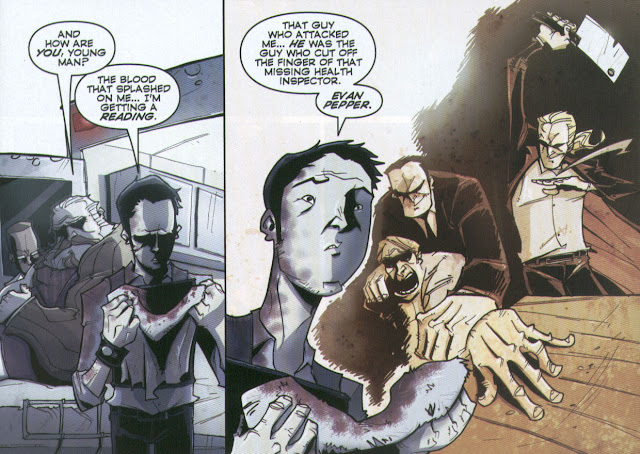 3. Chew (writer: John Layman/illustrator: Rob Guillory, 2009-present)
Layman and Guillory's clever, funny and sometimes gross Image series imagines a world rocked by a Y: The Last Man-like bird flu catastrophe (was Layman inspired by the footage of struggling Vietnamese chicken farmers in Laura Ling's 2006 bird flu piece for Current TV?). In the Chew-niverse, Poultry Prohibition is in effect, the poultry black market is as dangerous and murderous as the drug trade, and the FDA, suddenly the most powerful government agency in America, starts a Special Crimes division and turns to "cibopath" Tony Chu to bust all the crazies who have emerged since the bird flu. Chu's cibopathy allows him to see the history of any item he eats, from where it originated to who prepared it. So if Chu were the primary on the case of the Barbara Bel Geddes Alfred Hitchcock Presents character who killed her husband with a frozen leg of lamb and got rid of her weapon by serving it to the cops for dinner, Miss Ellie wouldn't have stood a chance. Guillory modeled Chew's often repulsed but brave detective hero after Lost cast member Ken Leung, whose ease with shifting back and forth between humor and seriousness would make him an ideal screen portrayer of Chu (although I have a feeling Leung, who had a bit part in X-Men: The Last Stand as a porcupine man who must be a nightmare in the sack for the ladies, might want a break from playing guys with weird powers). Here's a reason to admire Chew's white scriptwriter: he reportedly refuses to sign off on a screen adaptation if an APA actor isn't cast as his creation. In whitewash-crazy Hollywood (The Last Airbender, Mickey Rourke's possible Genghis Khan biopic), I wouldn't be surprised if Layman ends up in one hell of a fight. Heads up, Hollywood: Chu-style biting might be involved. 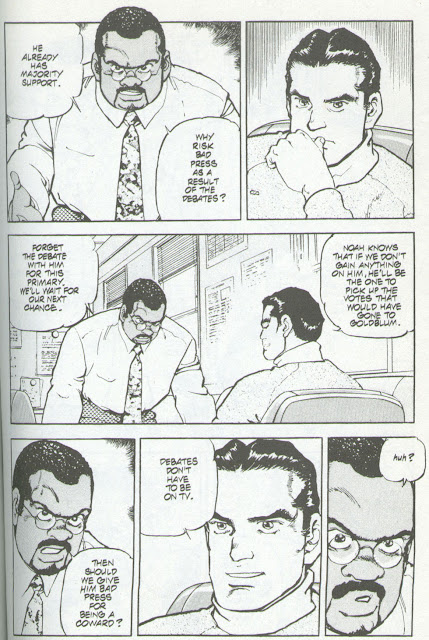 4. Eagle: The Making of an Asian-American President (writer/illustrator: Kaiji Kawaguchi, 1997-2001)
24 foretold a black president. The West Wing's final season envisioned a Latino one. Kawaguchi's soapy but riveting political manga imagined a Japanese American prez--several years before either of those shows introduced their fictional chief executives of color. Kenneth Yamaoka, the New York senator whose campaign to become the Democratic presidential candidate is the focus of Eagle, bears a few similarities to President Obama. Both are charismatic, self-deprecating former lawyers of biracial heritage who hail from Hawaii and have to put up with racist outrage over their ascension in the political arena. The major difference between Yamaoka and our current president is that Obama doesn't have an adopted daughter and an illegitimate son who fall in love with each other. The somewhat disgusting incest subplot is the weak link in an otherwise thoughtful and intriguing exploration of political strategizing and racism on the campaign trail. (The five-volume Eagle is currently out-of-print, but I unearthed the first two volumes at a local library and absorbed both chunky books in one sitting. Yamaoka's campaign manager Arthur McCoy resembles Human Target star Chi McBride so much that I couldn't help reading aloud some of McCoy's dialogue to myself in a McBride-style rasp.) 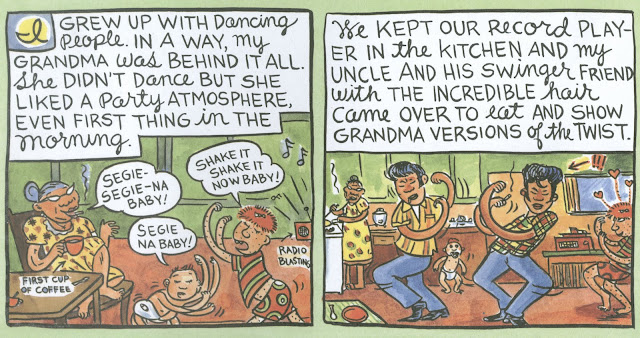 5. One Hundred Demons (writer/illustrator: Lynda Barry, 2002)
For her first autobiographical work, which she called an "autobifictionalography," the creator of the alt-weekly fixture Ernie Pook's Comeek took a cue from a Zen monk who would exorcise his personal demons by painting them, and she revisited her own demons from her past. They range from frustration over the travesty that was the 2000 Florida presidential vote recount to regret over choosing lousy boyfriends (the nameless pony-tailed boyfriend in the "Head Lice and My Worst Boyfriend" chapter is based on her ex Ira Glass). Many of the novel's most enjoyable or poignant sections involve Barry's days as a gawky, fatherless misfit who bonded with her fun-loving Filipino grandma and was subjected to nonstop verbal abuse from her far less compassionate half-Filipino mother. One Hundred Demons is an interesting precursor to American Born Chinese, and like Yang's novel, it's upfront about the painful side of growing up Asian in America and nostalgic for the delightful aspects of it, such as Barry's Pinoy relatives' impromptu dance parties (the American Born Chinese equivalent is Transformers toy battles with other Asian kids). Barry's rubber-limbed drawing style is especially charming during the chapter about dancing, which finds Barry paying tribute to the "keepers of the groove" and "the babies and the grandmas who hang on to it and help us remember when we forget that any kind of dancing is better than no dancing at all." 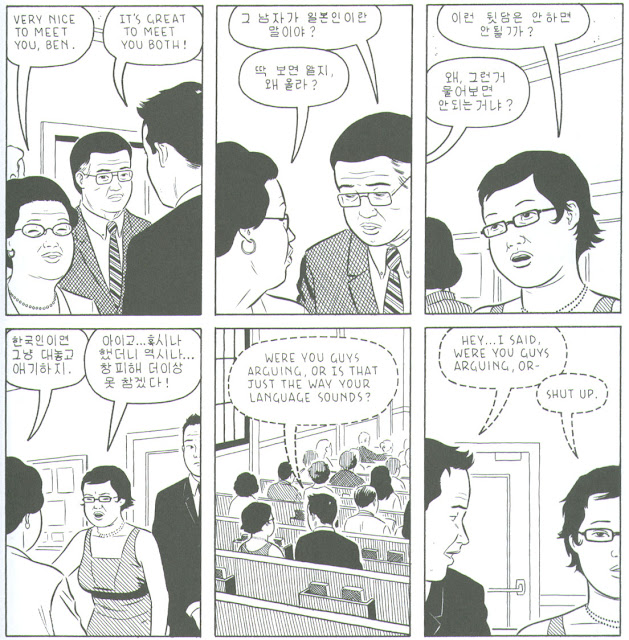 6. Shortcomings (writer/illustrator: Adrian Tomine, 2007)
I knew Shortcomings was terrific right when it began with a swipe at overly earnest APA indie films ("Why does everything have to be some big 'statement' about race? Don't any of these people just want to make a movie that's good?"). On the subject of Shortcomings, which collects a three-issue arc from his series Optic Nerve, Tomine told The Economist's Intelligent Life, "It became a challenge to create something honest. I didn't want to make a book that said 'it's cool to be Asian,' or 'racism is bad.'" That honesty--best exemplified by Tomine's refusal to make his New York-hating theater manager protagonist Ben Tanaka a completely likable romantic hero who's always in the right and who triumphs in the end--is why Shortcomings isn't just one of the best APA-made graphic novels but also one of the aughts decade's best novels, period. Tomine's downbeat (but not overly dour) and elegantly illustrated novel has often been compared to Annie Hall (which is also about a heartbroken misanthrope who has to brave a city he can't stand in order to attempt to patch things up with the one that got away), but the way Ben sabotages his relationship with his activist girlfriend Miko to indulge a fetish for white chicks and then amusingly suffers the consequences is more Larry David than Woody Allen. While many readers might detest Ben, it'd be hard to find anything to dislike about his mischievous and much less sullen Korean lesbian best friend Alice, whose acerbic exchanges with Ben are among the novel's highlights ("All Asians might look the same to you, but my family would spot your Japanese ass a mile away").
Posted by J. John Aquino at 2:10 AM