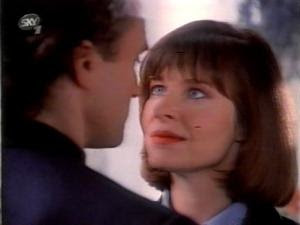 In this installment of "Lacuna Matata," I try my damnedest to recall another obscure TV gem that doesn't deserve to be so obscure. I promise this one's way more obscure than Mighty Mouse: The New Adventures, which some people don't think was obscure enough to be the focus of a "Lacuna Matata" installment.

While Googling desperately for anything I could find on my favorite Tarses creation, the short-lived Black Tie Affair, my search took me to a post in which the blogger writes at length about his--as well as my--favorite performance in the ultimate '80s teenage underdog flick, Teen Wolf: Tarses as the basketball coach.

I'll let "intensities" have the floor:


Unlike the great majority of Teen Wolf characters, Coach Finstock is something of a rarity in 80s teen movies--the adult authority figure who seeks neither to inspire or oppress the youth under his command. He is not motivated by a desire to teach, nor is he looking to project the failures of his own adolescence unto the kids he's teaching. In fact, Coach Finstock doesn't seem motivated by much of anything--he even seems fairly uninterested in whether the team wins or not, which as a Teen Movie coach, should really be his only concern...

The Coach offers Scott these words of wisdom, which I would consider to arguably be the greatest quote in all of film history:

"Listen, Scott, there are three rules that I live by: never get less than twelve hours sleep; never play cards with a guy who has the same first name as a city; and never get involved with a woman with a tattoo of a dagger on her body. Now you stick to that, and everything else is cream cheese."

Plopped in the middle of this clichéd, Jeph Loeb-scripted high school flick is a performance from a sharper-witted, less hackneyed movie. Methinks Tarses, not Loeb, wrote most of his own character's dialogue because the "three rules" speech sounds like it's straight out of Black Tie Affair. 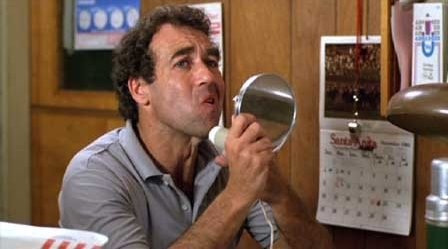 If you love Kiss Kiss Bang Bang and the Harry Lockhart, Gay Perry and Harmony Faith Lane characters like I do, you'd also enjoy Black Tie Affair, a private eye genre parody/homage with a similarly reluctant and in-over-his-head hero/narrator, Dave Brodsky (a pre-West Wing Bradley Whitford). He spies on cheating spouses like Cody Man fashion catalog tycoon Christopher Cody (John Calvin), the husband and business partner of his client Margo Cody (Kate Capshaw), not because he enjoys detective work, but because this analog man in a digital world wants to be able to continue running his musty, two-story Bay Area used LP store:

"Speaking of crime terminology, what the hell do they mean by forensics? And what exactly is a bunco squad? Police talk, I hate it."

"I do insurance fraud, Polaroids and 33 1/3 LPs. Two things I don't do? Compact discs and murder."

Brodsky's investigation of Chris is complicated by both his feelings for his attractive client and the body of a murdered woman Chris discovered at his hotel:

"When she called, I thought it was just a normal job--dress up in funny clothes, sneak into a strange room, snap pictures of a couple of naked people and hope the check clears. Now it looks like murder: the World Series of the detective game. Which means I've got to get off this case prontissimo."

(Thanks, Thrilling Detective and Gray Lady archives, for keeping alive three of the only few quotes I could find from Black Tie Affair. Entertainment Weekly's Lisa Schwarzbaum, who gave the show a C- in 1993, was out of her mind. I'll take Tarses' "manufactured drolleries" any day over the overwritten sentences that often make Schwarzbaum's reviews a chore to read.) 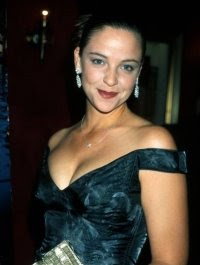 Adding to the other complications in Brodsky's case is his attraction to Chris' mistress, catalog supermodel Eve Saskatchewan (she and Margo were named after the rival actresses in All About Eve). Black Tie Affair gave me my first glimpse of recent Law & Order perp and '90s indie movie queen Alison Elliott (The Underneath, The Wings of the Dove), whose miniskirted appearances as Eve are another favorite memory of mine from a show that was doomed from the start.

Black Tie Affair was originally titled Smoldering Lust, but a few weeks before the NBC show's long-delayed premiere, the Peacock turned chicken and changed Tarses' original title to a less sexually charged one that they felt wouldn't offend already-pissed-off affiliates and advertisers. According to the New York Times' piece on Tarses, the network didn't even bother to tell him his show was renamed. Tarses learned about the title change from a reporter. The new title resulted in the last-minute removal of vocals from composer Patrick Williams' lite-jazz opening theme because the lyrics referred to the old title, which would have made more sense with the horny opening credits freeze-frames (a yuppie couple disrobes and makes out under the sheets) rather than Black Tie Affair.

The new title had very little to do with the show's neo-noir tone and was another in a long list of dumb titles that fail to lure us or tell us what to expect from the show or film. (Latest dumb title from a great show? Better Off Ted. Why did the person who came up with that title--I doubt it was creator/showrunner Victor Fresco--feel the need to rip off the title of John Cusack's teen suicide flick? What does Better Off Ted have to do with the show's backdrop, the research and development division of a conglomerate? And why did they have the title refer to Ted the straight man and narrator, who, despite being well-played by Jay Harrington, is the least interesting character in the ensemble? It's like if instead of Taxi, James L. Brooks called his ensemble show Alex's Garage. Why couldn't they have called it R&D? What is the deal with Grape Nuts? They're neither grapes nor nuts!)

NBC had little faith in a half-hour, laugh track-less show that wasn't quite a sitcom and wasn't quite a drama either (Tarses' Coach Finstock-style response to the Times about how to categorize Black Tie Affair was "I don't know how to describe it"), so the network burned off its episodes in a summertime Saturday night deathtrap time slot.

Besides Whitford's self-loathing yet likable outsider hero--he was like a Bay Area version of Jim Rockford and his iconoclasm reflected Tarses' outsider nature--and the clever and novel idea of having Brodsky run his agency from a used record store instead of a standard P.I. office, I also dug how Black Tie Affair wasn't an overt spoof in the mold of the Naked Gun movies and Carl Reiner's Fatal Instinct, though there were jabs at "police talk":


Mr. Tarses says he has more in mind than mere lampooning. "Sometimes it gets pretty heavy, down the road," he said, not wanting to reveal too much about pending episodes. "There are some pretty dramatic confrontations." The four main characters, he acknowledged, are not as ingratiating as Molly [Dodd] was. "I think these people all have a bit of an unsavory air to them, and you have to grow to like them," he said.

Then came the fly-covered cherry on the top of NBC's shit sundae: after four Saturday night airings, Tarses didn't get to show those dramatic confrontations he promised because the network gave up on Black Tie Affair and chose not to air the other eight episodes that were already completed, which left the show's mysteries unresolved. 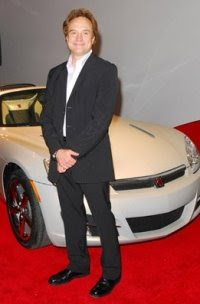 Who was the mystery woman Chris found dead in bed in the first episode and who killed her? Who will Brodsky choose to bed? Margo? Eve? Or maybe even Cookie, his underappreciated and much less neurotic assistant (played by hot Korean American model-turned-actress Maggie Han, star of another short-lived gumshoe show, Murphy's Law)?

And going back to the mystery at the top of the post, whatever the hell happened to Tarses?

After the cancellations of Black Tie Affair and Public Morals, an even more controversial 1996 collabo with Steven Bochco that only aired once, Tarses the outsider vanished from the production side of TV. Perhaps he was fed up with the creative differences he kept having with network execs since the '80s. Tarses fled to BBC Radio, where he created and starred in Revolting People (2000-06), a sitcom set in Colonial-era Baltimore.

Since his disappearance, network/basic cable TV (or rather, the part of it that doesn't involve assembly-line procedural franchises and reality shows) has kept up with Tarses' brand of smart, cinematic and laugh track-less comedy, which has been carried on by his grown-up children, Matt, a former Scrubs writer/producer whose most recent credit was Worst Week, and Jamie, a network exec-turned-producer of My Boys, where their father has made a couple of guest appearances. Even so, scripted TV still needs the elder Tarses. I wonder if he has another gem like Black Tie Affair left in him. Basic cable, a place where the standards are looser than the networks' and the creative freedom Tarses used to fight for is totally encouraged, would be the perfect playground for him.

Now that the mystery of Tarses' post-Public Morals whereabouts has been solved, what about the mysteries in Black Tie Affair? A DVD release of the complete, mostly unaired series is long overdue (I refuse to watch torrents of the series). I still want to know who killed the dead chick in the hotel room.
Posted by J. John Aquino at 3:35 AM