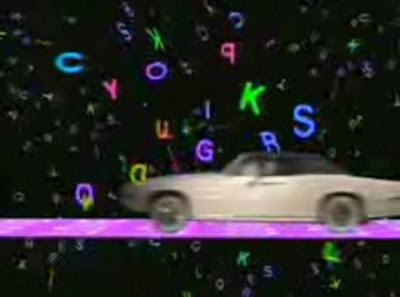 Hey, those letters are trying to say "cougars." I didn't know Prince likes him some Roscoe's Chicken and Wattles.

I'm recording a bunch of new segments for the Fistful of Soundtracks channel that I'll begin streaming this Tuesday. They'll be put on a loop for the rest of April.

During these segments, I'll be introing 26 film or TV score tracks, and each one will represent a different letter in the alphabet. It'll be like A Fistful of Soundtracks-meets-Children's Television Workshop. (I don't care that it's now called Sesame Workshop. It's always going to be CTW to me, just like how I always called it Candlestick Park, even when it was renamed 3Com Park and then Monster Park before wisely reverting to its original name.)

Also, in remembrance of Maurice Jarre(*), I'll be introing a couple of Jarre tracks that aren't "Lara's Theme" or the Lawrence of Arabia theme--the Zhivago and LOA themes are both classic but a bit overplayed.

(*) The beyond, deux blog has given my brief post about Jarre a nice mention. Thanks, beyond, deux!

There won't be any more new episodes of A Fistful of Soundtracks: The Series. I'm eschewing the episodic format for something more Scion Radio-like. You'll still be able to hear past eps of AFOS: The Series Wednesdays at 10am and 3pm Pacific, starting this Hump Day.
Posted by J. John Aquino at 3:30 PM