What Game of Thrones needs more than dragonglass is Henry Louis Gates Jr., so that he could stop Jon from banging his Auntie Dany 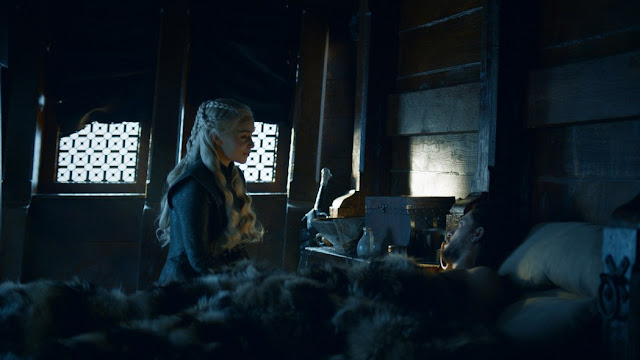 Game of Thrones, the most popular TV show in the world right now, is a show I've been ride-or-die for since the eerie White Walker attack that opened its 2011 pilot episode. It's a rare small-screen soap opera in which the action filmmaking on display during certain set pieces--marshaled by directors like Miguel Sapochnik and Breaking Bad veteran Michelle MacLaren, a.k.a. the original director of Wonder Woman before she quit over creative differences with Warner Bros.--is intriguingly on a par with the work of master craftsmen in the action genre like the "Johns": the late John Frankenheimer, John Woo and Johnnie To, Woo's much more grounded (as in there are no fucking doves in his movies) but similarly skilled Hong Kong compatriot.

There has never been a soap that has continually killed it in the action sequence department quite like Game of Thrones has. On The Soup in 2012, Joel McHale memorably ridiculed the horrendous, '60s Star Trek-style action choreography during a General Hospital clip of a stiffly performed marina shootout between a bunch of gunmen and Michael Easton, whose heroic General Hospital cop character happened to be named McBain, just like Rainier Wolfcastle's ultraviolent alter ego. That tepid-looking General Hospital shootout was how soaps, whether they were daytime sudsers or the tart-tongued and campy nighttime sudsers GoT has channeled during the scenes in King's Landing or Dorne, used to always handle elaborate action sequences--before GoT came along.

But there are times during GoT's run where I've felt like quitting the show. Ramsay Bolton's torture of Theon Greyjoy (and, later on in the show's run, Sansa Stark) was such an interminable and repetitive storyline I kept wondering when Kim Bauer was going to show up and stumble into the Dreadfort and somehow infect the IQs of everybody else in the castle with her dumbness. And GoT has attracted some criticism for being yet another fantasy genre franchise with a not-so-diverse cast and crew. That lack of diversity behind the scenes was never more evident than in the dumbest and most tone-deaf-about-race moment in the show's history: the white savior imagery of crowds of mostly dark-skinned slaves worshiping blond Daenerys Targaryen when she frees them at the end of the 2013 episode "Mhysa."

The white savior scene from "Mhysa" makes you understand the frustrations of black viewers like #OscarsSoWhite campaign creator April Reign, who's leading a #NoConfederate campaign to protest GoT showrunners David Benioff and D.B. Weiss and the currently-in-development HBO show the duo created and is planning to executive-produce, Confederate, a sci-fi drama about an alternate-history South that seceded from America and kept slavery alive. ("[GoT] has received sustained criticism not only for its gratuitous depiction of rape, but also the lack of diversity both with respect to actors and actresses, and those who work behind the camera. It is unfathomable that we are asked to believe in a time when dragons exist, but there are no people of color with significant roles," says Reign, who's skeptical about how the GoT showrunners will handle Confederate's subject matter.) Benioff and Weiss failed to see how uncomfortable the "Mhysa" white savior scene makes viewers of color feel, so what makes them qualified to tackle a difficult subject like the subjugation of black folks?

Troubling moments like the white savior scene sometimes frustrate me to the point where I'm close to giving up on GoT. And then just when I think I'm out, GoT pulls me back in with sequences like this:

Or catty exchanges like this one, a scene that made me understand a little better why women and gay men became fans of Dynasty back in the '80s:

Or Peter Dinklage's sublime delivery of lines like this: 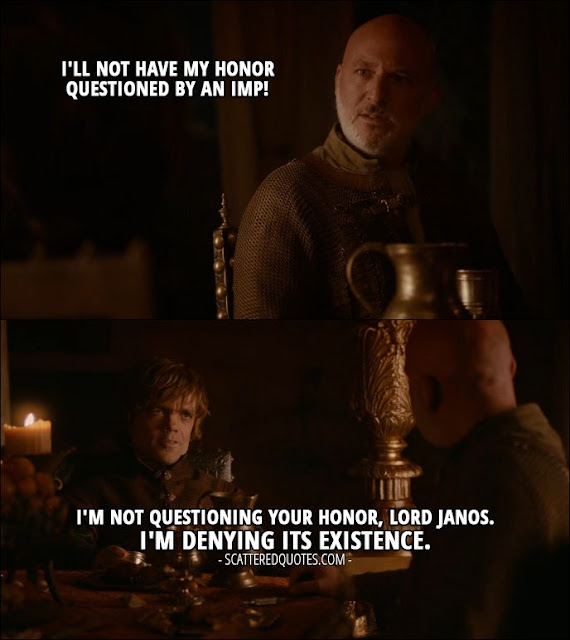 Or getting my favorite character on the show--Lady Olenna, the Queen of No Fucks to Give--and Brienne of Tarth to share a scene together so that a legendary action heroine from the '60s, who was somebody I grew up watching on cable in the '90s, could verbally high-five an action heroine from today:

Diana Rigg's brief scene with Gwendoline Christie warms the heart of any fan of Rigg's portrayal of Emma Peel on The Avengers. But there's nothing heartwarming about the growing romantic bond between Jon Snow and his new dragonglass mining benefactor Dany as GoT's seventh and penultimate season winds down. That's just disgusting. The Dragon Queen's your aunt, Jon!

Yet people on social media and elsewhere are thirsty for it.

Me: incest is wrong
Also me: when are Dany and Jon going to get together #GameOfThrones pic.twitter.com/BlIjKifMlQ
— Anna Vu (@realannavu) August 21, 2017

I didn't know I was a basic piece of trash until I so badly wanted Dany and Jon to kiss. MY HEART IS WEAK. #GameOfThrones
— Lilly Singh (@IISuperwomanII) August 21, 2017

A white supremacist is president of the United States, and TV viewers are actually cheering for incestuous lovemaking to take place on a nighttime soap. Ladies and gentlemen, I give you 2017.

I want Henry Louis Gates Jr. from Finding Your Roots to arrive by boat or dragon on this show and put a stop to this. Hit 'em with the genealogy charts, Professor! Sneak a ton of anti-aphrodisiac beans into Jon's dinner before "the Dragon and the Wolf" bone down! Do anything to intervene! 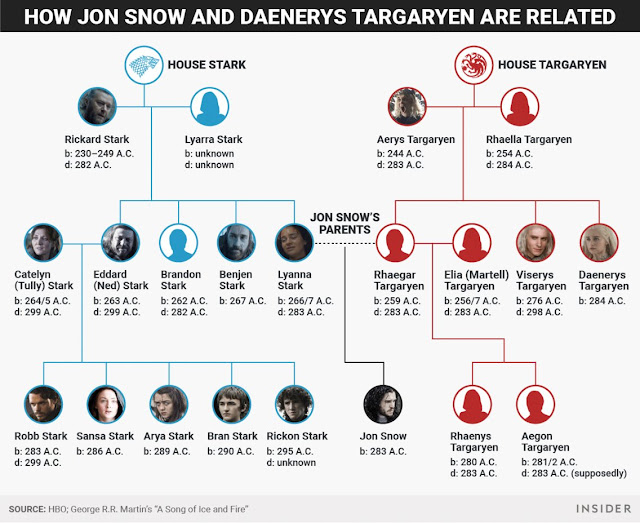 Estelle Tang from Elle and Megan Farokhmanesh from The Verge are right about this. "The Dany and Jon Thing on Game of Thrones Is So Gross" and, yes, "Game of Thrones' Jon and Daenerys romance is weak as hell."

Sure, Kit Harington and Emilia Clarke have tons of chemistry off-screen, but it hasn't translated into their scenes together. Compare their scenes to the scenes between Jon and Rose Leslie as Ygritte, the Wildling warrior Jon romanced back when he infiltrated her army.

Jon and Ygritte's love story was a carefully built storyline that was given time to breathe and grow--the genuine sparks between Harington and Leslie, who became a couple in real life, helped a lot too--whereas this sudden love connection between Jon and this new ally he's known for only four episodes is, like a few other storylines during GoT's abbreviated seventh season, badly rushed. That's what Farokhmanesh means when she says it's weak as hell. And any romantic pairing where it's two ultra-serious people (the King in the North and the Queen of Dragons)--instead of an ultra-serious person interacting with a jokester like Ygritte (a live-life-to-the-fullest type who got the perpetually brooding Jon to lighten up)--always makes for boring TV.

Jon and Dany's incestuous attraction to each other, especially in "Beyond the Wall," the seventh season's penultimate episode, is meth-hillbilly-level gross. Yet it hasn't caused me to consider quitting the show like I did during "Mhysa" or the endless sadism of a one-dimensional villain like Ramsay (he was never as compelling a villain as Joffrey or his stage mom Cersei). Though I hate seeing nephew and aunt (by the way, she just lost one of her dragons, so she's definitely not thinking straight) stare longingly at each other, I'm curious about how it will connect to the way this show will end.

I believe that the addition of Jon and Dany, a.k.a. Ice and Fire, to the show's list of incestuous pairings like Jaime and Cersei Lannister is a hint that GoT will end on a downbeat note about how everything's corrupt, nothing will ever change, history repeats itself and incest is often to blame for it all. That point is nothing new to prestige dramas on TV, but it's unusual to see in a medieval fantasy featuring mostly noble knights and badass dragons, which is why so many viewers were shook after watching moments like Joffrey's decapitation of Ned Stark or the Red Wedding. They weren't prepared for the level of cruelty and brutality GoT (and its source material, George R.R. Martin's series of Song of Ice and Fire novels) brought to the kind of genre where the Starks, the family most of the show's viewers identified with in the first season, would usually be the clan that always emerges victorious and with their heads still intact--if they were being written by creators or writers who weren't as pragmatic or cynical about the way the world works as Martin has been in his Ice and Fire novels, that is.

The surviving Stark kids seem to think they're avoiding the mistakes Ned made when he was alive, but at the moment, Sansa and Arya are at odds with each other (or maybe they're pretending to argue, and it's all part of a Stark family plot against Littlefinger). Bran is too far up his own asshole to be useful or helpful to anybody. Jon may be a brave soldier, but he remains a terrible tactician, even after Melisandre brought him back from the dead.

This fucking family of Andy Sipowiczes (just like Sipowicz, nothing but terrible shit happens to the Starks on this show) is one of several examples of GoT's recurring point that simply saying you're a good person and claiming to know what's right or sticking to all of your principles are not enough to help you survive a harsh world like Westeros. It cost Ned his head, while over in House Targaryen, Dany, whose dialogue about doing what's right and breaking the wheel and taking the Iron Throne has probably been turned into a drinking game somewhere by now, is heading in a different direction and becoming the type of ruthless (and fond-of-incest) despot she's always claimed to be fighting against. (Last year, a Vox writer posted "Why I think Game of Thrones will make Daenerys the villain, not the hero.") Judging from the way things are right now on the show, I feel like GoT will not end in triumph and will ultimately be a tragedy like the Godfather movies or two of the most depressing westerns ever made, 1968's The Great Silence and 1980's Heaven's Gate. Like Anna Silman said in "I'm Rooting for the Lannisters," this is a show that's always been proud of its perversity. A bleak final episode would be the ultimate perverse twist.

Whether or not Jon's half-Targaryen lineage will be revealed to Jon and Dany, incest will ruin the two leaders' alliance. The White Walkers and their newly zombified dragon get to conquer the world, and winter will be forever, partly because the King in the North couldn't keep his head in the game and couldn't keep it in his pants.

We're basically seeing Ygritte's old catchphrase of "You know nothing, Jon Snow" culminating in the most dark and dis...taste...ful outcome imaginable. Professor Gates, where the fuck are you?