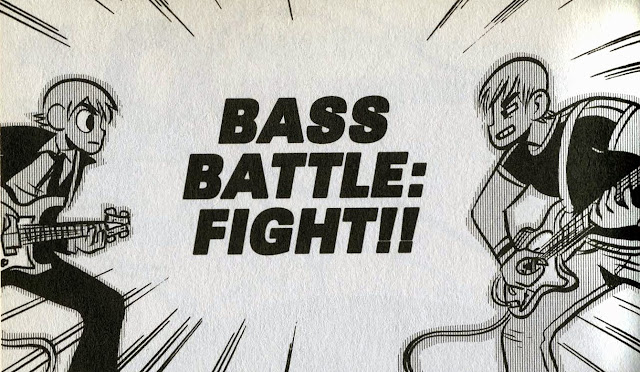 Oscar-winning Room star Brie Larson has had a killer year as a dramatic performer, so it's time to revisit my March 5, 2015 discussion of an offbeat cult movie in which Larson got to revisit her little-known past as a teenage pop singer, as well as experience a taste of her future. In this 2010 movie, Larson briefly dabbled in the same kind of pulpy material she'll be tackling soon as the star of the forthcoming tentpole blockbusters Kong: Skull Island and Captain Marvel. This 2010 movie has also been on its director's mind lately. When it aired on Channel 4 in the U.K. last month, the director live-tweeted a bunch of crazy behind-the-scenes details about the movie.

The 2010 coming-of-age flick Scott Pilgrim vs. the World is an interesting anomaly in the work of Edgar Wright, the great British director behind the innovative sitcom Spaced and the irreverent Cornetto trilogy with Spaced stars Simon Pegg and Nick Frost (Shaun of the Dead, Hot Fuzz and The World's End). It's his only adaptation of someone else's creation so far, it doesn't take place in England, neither Pegg nor Frost are in the cast and it was his first studio movie, so that meant he had to deal with the often absurd American test screening process.

While Wright has said he's proud of Scott Pilgrim's final cut, that first experience of trying to please studio execs during the making of that movie had to have colored his heartbreaking decision to quit directing his longtime pet project, this summer's adaptation of Marvel's Ant-Man, where Wright was replaced by Bring It On director Peyton Reed. While squabbling with Marvel Studios execs over the direction of Ant-Man, I'm sure Wright was thinking, "How can the same shit happen to the same guy twice?"

It's remarkable that a movie as inventive as Scott Pilgrim survived such a maddening process where the comments from test audiences and studio execs often win out over what the filmmakers want--and did so with all its inventiveness intact. Scott Pilgrim is such a perfect marriage of source material and filmmaker. Bryan Lee O'Malley's original Scott Pilgrim graphic novels feel like a Toronto indie rock scene version of Spaced. Scott and his roommate Wallace are basically Tim and Mike, except Wallace isn't obsessed with joining the military and is aware he's gay. While Spaced imagines that time when you're trying to navigate yourself both professionally and romantically through your 20s as silly fan film-ish versions of either Star Wars, Hong Kong gun fu, a George Romero flick or The A-Team, Scott Pilgrim cleverly envisions relationship drama as both Kung Fu Hustle and an 8-bit Nintendo game.

Wright's film really gets video games like the 8-bit ones I grew up playing. (Speaking of 8-bit, Radiohead producer Nigel Godrich's original score for the film effectively combines 8-bit with orchestra, especially during the "Boss Battle" cue for the climactic moment when Gideon is handed his ass, and it goes completely 8-bit at times, like during that amusing cover of Jerry Goldsmith's Universal logo music at the start of the movie or the source cue Dan the Automator created for Scott and Knives' Ninja Ninja Revolution video game.) Along with Run Lola Run, The Raid: Redemption, Edge of Tomorrow and maybe Dredd, Scott Pilgrim is one of the best video game-style movies not based on an actual game.

Wright's understanding of another kind of visual language, that of comic books like O'Malley's Scott Pilgrim novels--and his ability to figure out which parts of that visual language work on screen and which ones don't--fortunately turn the Scott Pilgrim film into the opposite of Ang Lee's lead-footed overstuffing of 2003's Hulk with screen panels and visible page breaks, or as Stop Smiling magazine's Justin Stewart described the screen panels and page breaks in my favorite takedown of Lee's Hulk, "the cinematic equivalent of Karl Rove dancing." Also, thanks to action filmmaking skills he previously demonstrated in Shaun of the Dead, Hot Fuzz and even a few Spaced episodes, Wright makes convincing fight scene combatants out of the least likely actors you'd ever imagine to be in a fight scene, whether it's Michael Cera as Scott, Mae Whitman as Roxy Richter or Jason Schwartzman as Gideon the girlfriend-beating music producer douche (Wright went on to do the same with Nick Frost during his fight scenes in The World's End, transforming him into the most agile rotund action star who's not Sammo Hung).

As believable as Cera is in his fight scenes, he's overshadowed in his own movie (it was supposed to turn the gawky and conservatively dressed teen from Arrested Development and Superbad into a bigger movie star, but nobody outside of Scott Pilgrim novel fans flocked to the movie in the summer of 2010) by funny turns by Ellen Wong as Knives, Kieran Culkin as Wallace and Brandon Routh as dim-witted vegan bassist Todd Ingram, one of the Evil Exes who used to date Ramona (Mary Elizabeth Winstead) and are now challenging Scott to a duel. Scott Pilgrim proves that Routh, who brooded through all of his passable impression of Christopher Reeve in Superman Returns, is at his best as a light comedic actor, which is why I'm glad Arrow's current season is having him tap into those comedic gifts again as the Atom (it's refreshing to see a revenge-minded superhero--Ray Palmer's in the game to avenge his wife's murder--who's not brooding all the time).

As Knives, the clingy, too-young-for-Scott schoolgirl who doesn't take being dumped by Scott very well, Wong is a real find, and she deserves to go on to bigger and better things (since Scott Pilgrim, she's been a cast member on both the Canadian-made 2011 Afghanistan medical drama Combat Hospital and The Carrie Diaries). Part of me wishes the Scott Pilgrim graphic novels and movie version were mainly about Knives instead of Scott. It's interesting to read Asian moviegoers' varied reactions to Wong's performance as Knives five years after the movie's release. They were as divided about the Knives character as black moviegoers were divided about Denzel Washington's heel turn in Flight in 2012.

Writers from YOMYOMF would say things like "Ellen Wong alone was worth watching the film. She was freakin' ADORABLE. Dolls should be made of her," and Asian American Scott Pilgrim fans dug Knives so much that they've cosplayed as her. Meanwhile, a discontinued Asian Canadian collective of bloggers that called itself "the invazn" felt that "It's kind of sad to see Asian women be the 'exotic in-between' girlfriends who aren't even real girlfriends, but pure ego boosters for the main character's lack of masculinity" (someone should have told them O'Malley himself is half-Asian and not some white graphic novelist writing from the outside about people of color he's never interacted with), although the blog's reviewer enjoyed seeing Knives take charge towards the end of the movie and battle both Ramona and Gideon.

"I was just super-proud that I had created a plum role for someone like Ellen Wong, who otherwise may never have been in a major movie, just by being born Asian and Canadian," wrote O'Malley in a fascinating 2013 Tumblr post. He admitted in that post that the cast of mostly white characters and a few Asian characters in the original novels reflected an unenlightened attitude towards race he had for the first 20 years of his life, and he ended up being appalled by how white the movie looked. His willingness to admit those things must have taken as much guts as it does for Scott to admit to his exes Knives and Kim Pine (Alison Pill), the snarky and sullen drummer in Scott's band Sex Bob-omb (notice how all the drummers in the movie are female), that he shouldn't have been so careless about how he treated them when he dated them. Scott Pilgrim gets some flack for being an overly noisy and hyperactive movie that doesn't take enough time to breathe and be more naturalistic, but that scene where Kim briefly sets aside her snarky and sullen demeanor and wordlessly accepts Scott's apology is one of several human touches in the movie that make Scott Pilgrim more human than the average video game-inspired movie. It's also an example of how great an actor Pill is (watch her also command the screen in a much more broadly played way during her one scene as a fascist schoolteacher in Snowpiercer).

Scott Pilgrim does so many things well as a video game movie, a comic book adaptation and a coming-of-age farce that it's easy to forget what it also accomplishes as a movie about small-time rock bands. I knew Scott Pilgrim would be a solid battle-of-the-bands movie right when it had characters attempting to talk to each other inside a club, and they couldn't hear each other, a typical aspect of modern-day nightlife Hollywood rarely gets right. The running joke of the unenthusiastic MC who's as excited about introducing musical acts as Robert De Niro is about sitting through a press junket is another funny, straight-out-of-real-life touch during the movie's band scenes, as is the way that Beck, who wrote and recorded Sex Bob-omb's material, purposely downgraded the quality of his own sound to capture what a not-so-great band in the Toronto indie scene would sound like. Scott and his bandmates view the glitzy Clash at Demonhead--led by Scott's hot ex-girlfriend Envy Adams (Brie Larson)--to be evil corporate sellouts, but the ironic truth is Envy and her band don't sound as mediocre as Sex Bob-omb do, as we discover during "Black Sheep," sung quite nicely by Larson very briefly in the film (while it's sung on the Scott Pilgrim ABKCO song album by Metric frontwoman Emily Haines, whose Toronto-based band provided material for The Clash at Demonhead and whose fashions O'Malley used as the basis for Envy's in the novels). I wish the regular release of the ABKCO song album included the Larson version of "Black Sheep" as a bonus track, but fortunately, it can be heard in its entirety as a Blu-ray extra or right below.

You also have to be in lesbians with a movie that riffs on Goldsmith's Universal logo music not once but twice. While rewatching Scott Pilgrim, I completely forgot about Chris Evans cracking his neck to the pounding drums of the Universal logo music and laughed my ass off.

What other movie has done a sight gag like that? It's also a moment where you're so relieved that those meddling kids from the test screening audiences who have attempted to ruin so many perfectly decent movies didn't get to intervene.