I Can't Believe I've Never Heard It Till Now!: Arturo Márquez's "Danzón No. 2"


"I Can't Believe I've Never Seen It Till Now!" is a series of posts that appear sporadically here on the AFOS blog rather than weekly. In each post, I reveal that I never watched a certain popular movie--or that I never encountered a certain popular piece of music--until very recently, and that's largely because I'm Filipino, we're always late to the party and that's how we do.

When Mozart in the Jungle, the Amazon original series about the New York classical music world, took home Best Comedy Series and Best Actor in a Comedy for Gael García Bernal--as unorthodox conductor Rodrigo de Souza--at the Golden Globes earlier this year on January 10, Amazon celebrated its show's Golden Globe wins by allowing viewers who don't subscribe to Amazon Prime to stream for free every Mozart in the Jungle episode for only one day on January 17. I really wanted to see if Mozart in the Jungle got any better after its so-so pilot, which I watched for free on Amazon during Amazon pilot season a year before (I don't subscribe to Amazon Prime because it's too expensive for my blood), so I had to kiss the whole Sunday goodbye and try to stream Mozart in the Jungle's entire run before it turned back into a pumpkin at midnight.

Streaming two whole seasons in one Sunday is difficult to accomplish, especially when you're like me and you don't believe in binge-watching. I think it's a terrible way to savor scripted TV--I believe in taking my time when it comes to watching shows--and I also don't like to call it binge-watching because that word makes the act of TV-watching sound disgusting and Mr. Creosote-ish. Streaming two seasons in one Sunday is also difficult when you're the kind of viewer who can get fidgety after only two hours of marathoning a show and Sunday isn't the best day to be marathoning the entire lifespan of a show because after much procrastination, Sunday usually ends up being the day when you have to go replenish your fridge with groceries or else you're screwed for the next few days. Despite those obstacles, I was able to get as far as the third-to-last episode of the second season before Mozart in the Jungle turned back into a pumpkin.

As Rodrigo, the mercurial artistic soul whom aspiring oboist Hailey Rutledge (Lola Kirke) falls in love with and whom Mozart in the Jungle creators Roman Coppola, Jason Schwartzman (Coppola's cousin) and Alex Timbers loosely based on Venezuelan rock-star conductor Gustavo Dudamel, Bernal definitely deserved that Golden Globe. At times, Mozart in the Jungle threatens to turn into Entourage-y lifestyle porn, but it's neither as douchey as Entourage nor as unconvincing in its attempts to establish why its fictional central figure is an A-list star. I never could buy that the rather boring-ass Vincent Chase is a movie star--a CW star maybe, but not the 1997-ish DiCaprio type Entourage frequently hyped up Vinnie to be--whereas thanks to the amount of time Mozart in the Jungle spends on Rodrigo's creative process, as well as the vitality and warmth Bernal brings to Rodrigo, you understand why Rodrigo is such a highly regarded conductor and why every musician in the fictional New York Symphony would take a bullet for him. 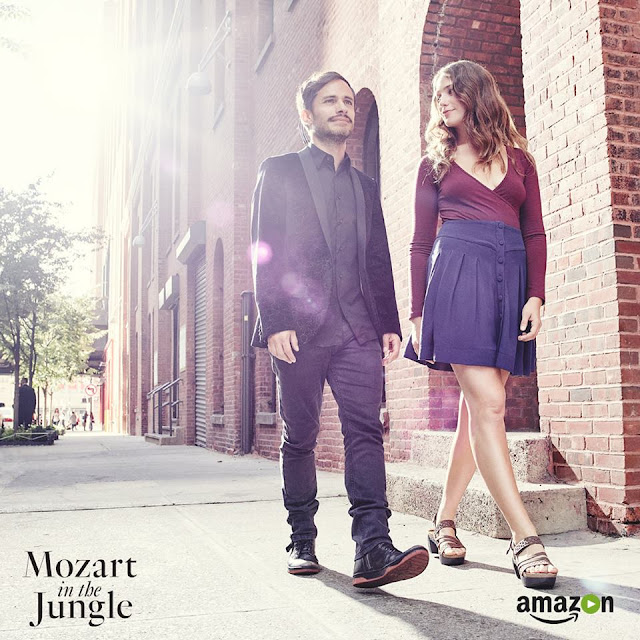 While classical music nerds are having tons of quibbles with Mozart in the Jungle's portrayal of the classical music world, I'm unable to find loads of things to nitpick about because I'm only familiar with that world from a film score music standpoint. But I do have one quibble with Mozart in the Jungle: the classical music world is full of Asian stars like violinist Sarah Chang and pianists Lang Lang and Yuja Wang (it's basically the opposite of the film industry in Hollywood and its allergy to Asian American actors), and the only Asian character on the show is frigging Sharon (Jennifer Kim), a subservient non-musician who banged Rodrigo when she was his assistant in the pilot and whose sole characteristic is that she still carries a torch for Rodrigo despite betraying him and the New York Symphony to go work as an assistant for their biggest enemy.

Mozart in the Jungle's first season, the batch of episodes that won Mozart in the Jungle its two Golden Globes, is a bit like The West Wing: nearly everybody on the show is white, they all love working for an enigmatic but charismatic and immensely likable Latino guy and the opening titles are in the Trajan typeface. The second season is more confident of itself storytelling-wise and is better than the first, as well as much less in thrall to The West Wing: the previously unimaginative opening titles have ditched the boring West Wing typeface for much more fanciful--and much more fitting--animated graphics that, unlike the season 1 intro, are customized for each episode.

Amazon's confidence in Mozart in the Jungle after the first season allowed the crew to expand the scope of the show and take its cameras to Rodrigo's old home turf of Mexico for a standout two-parter, and while Bernal remains as charismatic and immensely likable as ever, the Mexico two-parter does an effective job adding extra shading to the character of Rodrigo and making this enigmatic rock star type more relatable ("I'm a nerd just like you," admits Rodrigo to Hailey, or as he awesomely calls her, "Jai Alai," after Jai Alai is surprised by how ordinary his old bedroom at his abuela's house looks). The sycophantic Sharon remains an underwhelming representative of Asians in the show's universe, although the second season kind of makes up for the mistake that is the Sharon character by finally acknowledging the existence of Lang and another Asian classical music star, part-Japanese New York Philharmonic conductor Alan Gilbert, who both guest-star as themselves in the super-sized episode "Touché Maestro, Touché."

But any time Coppola directs an episode like the "Regresso Del Rey/How to Make God Laugh" two-parter in Mexico or last season's "You Go to My Head," Mozart in the Jungle just plain soars. His episodes are full of the same kinds of dreamlike traits and visual splendor that distinguished 2001's CQ, Coppola's underappreciated feature-length directorial debut about the making of a '60s B-movie.

"How to Make God Laugh" is also special for twice featuring excerpts from composer Arturo Márquez's 1994 classical piece "Danzón No. 2," a composition Rodrigo gets to guest-conduct when Maestro Rivera (Emilio Echevarría), his old mentor, literally passes the baton to him for an outdoor performance with the current members of the Mexican youth orchestra where Rodrigo got his start. The Coppola episode may have introduced me to this exhilarating and soulful Mexican composition I never heard before, but when I heard the Bay Area classical station KDFC present Dudamel and the Simón Bolívar Youth Orchestra's live performance of "Danzón No. 2" in its entirety a few weeks after I saw the episode, that was the moment when I really fell in love with "Danzón No. 2."

Hearing the composition in its complete nine-minute form (instead of the bits and pieces "How to Make God Laugh" culled from "Danzón No. 2") made me better understand why, according to Peruvian composer Aurelio Tello in an NPR piece about Márquez, "The audience was shouting, and for five or six minutes, the audience were [sic] clapping," when "Danzón No. 2" had its Mexico City premiere in 1994 (hearing Dudamel's nine-minute live version on KDFC also made me purchase the album it comes from, Dudamel's 2008 Deutsche Grammophon album Fiesta). I know nothing about Mexican classical music or the danzón, the Cuban ballroom dance style Márquez stumbled into in Mexico City in the early '90s before he was inspired to write "Danzón No. 2" as a tribute to danzón rhythms and '30s swag. But if this is what Mexican classical music has been like in the last 25 years, wow, America really needs to be exposed to more classical music from Mexico.

Just like what happens whenever I revisit Jay and Biggie enthusiastically dropping bars during "Brooklyn's Finest," I never want "Danzón No. 2" to end whenever I hear it, and I'm always kind of sad when it's over. "Danzón No. 2" radiates hopefulness.

It's no wonder that, as the Fiesta album liner notes point out, the biggest fans of "Danzón No. 2" in Mexico have considered it an alternate Mexican national anthem, like how some Americans wish George Gershwin's "Rhapsody in Blue" were the national anthem (instead of Francis Scott Key's boring "Star-Spangled Banner," which sprang to life only when either Jimi Hendrix or Marvin Gaye took a stab at it and is so disliked by Esquire's Miles Raymer that he joked that R. Kelly's "Ignition" remix would be a better national anthem than "Star-Spangled Banner"). In fact, the wave of national pride during the 1994 Zapatista Chiapas uprising against the Mexican government also inspired Márquez as he composed "Danzón No. 2."

While many view "Danzón No. 2" as an anthemic type of work, director Guillermo Ortiz Pichardo envisioned "Danzón No. 2" as the story of a torrid love triangle in a '40s Mexico City dance hall when he made a short 2009 film of the same name featuring both "Danzón No. 2" in its entirety and Márquez in a cameo as a pianist. It's remarkable how well "Danzón No. 2" fits in with Pichardo's pulpy vision of dance hall workers becoming entangled with fedora-wearing gangsters.

It's an interesting time to be discovering "Danzón No. 2" via Mozart in the Jungle and KDFC, especially when Donald Drumpf is in the middle of a bizarre rampage against Mexico as part of his presidential campaign. The next time the ornery Oompa Loompa or any of his deranged followers tries to spread more lies about Mexico being a country of rapists and murderers, a Mexican protester ought to wave around a phone or a boombox and put on "Danzón No. 2"--whether it's a version conducted by Dudamel or a version conducted by the great female conductor Alondra de la Parra--to troll those hatemongers and remind everyone else that Mexico produces many moments of beauty like "Danzón No. 2."

I don't want that protester to just put on "Danzón No. 2" at a reasonable volume that's reasonable enough for Milton Waddams to collate data to. I want that person to blast it loudly and right in the racist Drumpf crowd's faces, until their ears bleed and their combovers slide off their scalp.