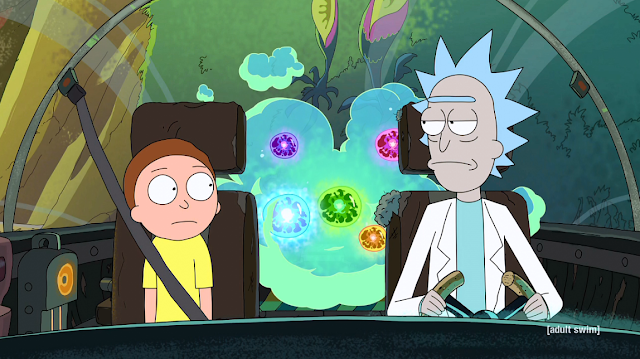 In a Rolling Stone profile about the creative challenges Justin Roiland and Dan Harmon have faced while trying to equal the brilliant first season of their irreverent and renewed-this-week-for-a-third-season Adult Swim hit Rick and Morty, Harmon said, "Most second albums suck." Uh, Elvis Costello's This Year's Model, Public Enemy's It Takes a Nation of Millions to Hold Us Back, the Beastie Boys' Paul's Boutique, De La Soul Is Dead, A Tribe Called Quest's The Low End Theory, OutKast's ATLiens, D'Angelo's Voodoo and Kendrick Lamar's good kid, m.A.A.d. city would like a word with you, Harmon.

But yeah, otherwise, I see Harmon's point as he and Roiland admitted "A Rickle in Time"--Rick and Morty's complicatedly written second-season premiere about the side effects Rick and his grandkids Morty and Summer experience due to Rick's time-freezing device from "Ricksy Business"--is not as satisfying as they wish it could be. Harmon said, "It went off the deep end conceptually and got really over-complicated." I actually like "A Rickle in Time" a little more than Roiland and Harmon do, but the new season's second episode, "Mortynight Run," is where the season really starts cooking.

"Mortynight Run" taps into the thing that surprised me the most about Rick and Morty's first season and made the show stand out from other Adult Swim fare, outside of The Venture Bros.: its downbeat side (and more of that downbeat side surfaces in this week's Rick and Morty episode, "Auto Erotic Assimilation"). I hate to refer to a line from a movie I despise, but Gandalf's line to Bilbo about returning home a different person in The Hobbit: An Unexpected Journey really applies to Morty. His adventures with his scientist grandpa have made him a better person, and those adventures have allowed the learning disability-afflicted kid to prove to Rick that he's not as dumb as Rick thinks he is. But those adventures have also made Morty better understand his grandpa's misanthropic and nihilistic worldview, and like in "Meeseeks and Destroy" and "Rick Potion #9," we see how much Morty's gradual understanding of why Rick has that worldview wrecks Morty inside in "Mortynight Run." In only less than a half-hour, the episode ends up doing a better job than those interminable Hobbit movies of showing how these exhausting adventures affect the traveler who won't be the same.

Sure, "Mortynight Run" is hilarious. Special guest star Jemaine Clement gets to both sing and make fun of his own association with musical numbers. "Goodbye Moonmen," written by Harmon and credited "Mortynight Run" writer David Phillips and composed by series composer Ryan Elder, is the cleverest David Bowie parody since, well, Clement's Bowie tribute on Flight of the Conchords. Special guest star Andy Daly takes a stock hitman character and imbues him with amusingly incongruous chipperness in the mold of his Forrest MacNeil character from Comedy Central's Review. The Jerryboree--a day care center where the Ricks from various universes drop off the Jerrys of their universes when they don't have time to put up with the Jerrys' shit--is great "let's beat up on Jerry again" material, but it's also an intriguing subplot about Jerry's realization that his ordinariness isn't as awful as others think. I especially love how a maudlin VR game called Roy--the player determines the decisions of an ordinary guy in scenarios that are like a cross between a David Anspaugh sports movie and the Star Trek: The Next Generation episode "The Inner Light"--is the biggest arcade sensation in outer space instead of a first-person shooter ("You beat cancer and then you went back to work at the carpet store? Boo!").

But what makes "Mortynight Run" especially stand out is the way it treats the moment when Morty--after defying Rick and protecting the life of Clement's character, a benevolent and frequently singing gaseous being, from assassins and cops because he believes all life forms are precious no matter what their flaws are--discovers the being (Rick calls him "Fart") intends to wipe out all life, so Morty makes a difficult decision that was foreshadowed by the scene of him playing Roy at the Dave & Busters-ish Blips and Chitz. "Mortynight Run" doesn't play Morty's moment of anguish for laughs.

On Community, Harmon couldn't have characters actually kill people--hence all those bloodless paintball episodes--but on the much more fantastical and bleak Rick and Morty, Harmon can. Through Morty's dilemma regarding Fart, Phillips, Harmon and Roiland treat the consequences of causing many lives to end because of foolishly sticking to a belief that it's all for the best--and the first time Morty kills somebody in front of him--with the proper weight they deserve. "Mortynight Run" is a good example of what Vox describes as Rick and Morty's "exploration of morality that manages to avoid simplistic fables with pat lessons," as well as the implication during that exploration that "Rick's cynicism is well-founded--and that following Morty's well-intentioned instincts can lead to calamity."

While Bob's Burgers channeled the ambience of Midnight Run in its tribute to that 1988 film (for example, that episode's score music paid tribute to Danny Elfman's score from the film), "Mortynight Run" chooses to pay tribute to the non-comedic side of Midnight Run--one of Harmon's favorite films--without ever quoting a single line from it (the only blatant references to Midnight Run are the scene where all the Jerrys are enjoying a copy of Midnight Run with director's commentary, an extra that, sadly, by the way, doesn't exist in real life, and the moments of Rick, Morty and Fart evading the cops like De Niro and Grodin). Midnight Run is one of my favorite films too. On some days, it skyrockets to being my absolute favorite. GoodFellas may be a more challenging and brutal crime comedy, and Do the Right Thing may be more meaningful because it has something important and complex to say about community and injustice, but at the end of the day, I just want to be entertained by a well-made escapist work that doesn't make me say, "Well, that plot point was dumb"--or "Great, another Asian Stepin Fetchit with a cartoonish accent who helps make it fucking difficult for so many of us to get dates or actual jobs." And Midnight Run is exactly that.

Midnight Run also pulls off shifts in tone from comedic to dramatic more seamlessly than most big-screen comedies--and almost every small-screen comedy from the '80s--where the cast and crew attempt to do the same kind of tonal shifts. Harmon seems to have absorbed Midnight Run's lessons on how to skillfully juggle humor and seriousness during his work on both Community and Rick and Morty, and the De Niro/Grodin film's skillful juggling act receives a proper tribute in "Mortynight Run." The quality of episodes like "Mortynight Run" is why Rick and Morty is now receiving slightly similar tributes from the Internet as well. The Internet's way of paying tribute to Rick and Morty is to recut the dialogue of alcoholic Rick to the rhythm of unapologetic teetotaler Kendrick Lamar's "King Kunta." It makes no damn sense. But it's also brilliant, much like Rick and Morty itself.