Shows I Miss (Already): Selfie (with guest blogger Adam from Slant Eye for the Round Eye) 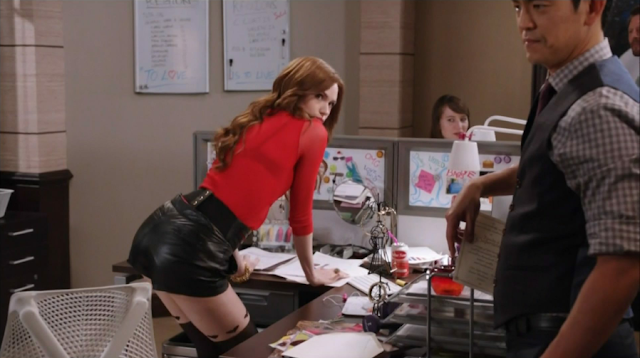 There are several things I'm going to miss about the short-lived Selfie, a hashtag-era reimagining of Pygmalion that has been rescued from post-cancellation limbo by Hulu and will finish out on Hulu the rest of its 13-episode run, starting today. They include the genuine chemistry between Karen Gillan as narcissistic pharmaceutical sales chick Eliza Dooley and John Cho as her marketing guru co-worker Henry Higgs and the rare and groundbreaking sight of an Asian American male as a romantic lead on a single-camera comedy that's not a YouTube show. Cho's Harold & Kumar franchise has been putting Asian American guys in romantic lead roles for three consecutive movies and an upcoming Adult Swim animated version now. It took 10 goddamn years for prime-time network TV to catch up to Harold & Kumar.

I'll also miss any scene where Gillan dances (especially to Wiz Khalifa) and that wig Gillan has to wear as Eliza (after Gillan had all her hair shaved off to play a bald alien warrior in Guardians of the Galaxy) somehow stays on; that little kid whose sobs sound like Eddie Murphy laughing; and the solid character writing and visual panache shepherded by Suburgatory and Selfie creator/showrunner Emily Kapnek, the Frank Tashlin of single-camera comedies. Like Tashlin, Kapnek started out in animation, which explains the strong visual sense she brought to both Suburgatory's first two seasons (before a huge budget slash really affected that show) and Selfie.

Kapnek's Nickelodeon background--I often forget that Nick nurtured Hey Arnold! and Dora the Explorer, kids' shows with lead characters of color--also explains the incredible diversity of the worlds of Suburgatory and Selfie, both casting-wise and music-wise. The huge amount of interracial couples on Suburgatory and Selfie nicely reflects the world outside the TV screen, and I'll always adore Kapnek for soundtracking a Suburgatory scene at a house party with Full Force's "Ain't My Type of Hype" from House Party. 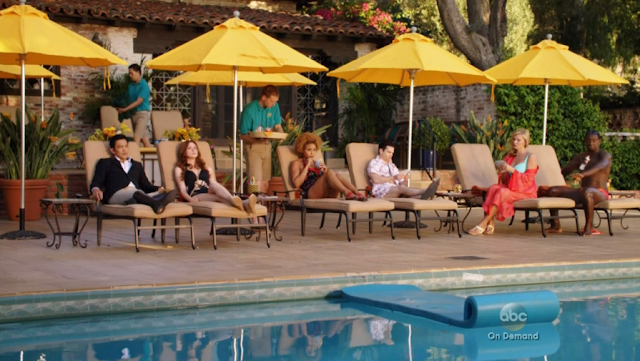 But there's one thing none of the few TV critics who have been in Selfie's corner have noticed about the show, and I think I might miss this element most of all: the pause-button-worthy attention to detail in the show's cutaways to screen shots of social media. Those screen shots were dead-on about the dumb or vacuous things that are often said in comments sections and on social media feeds. 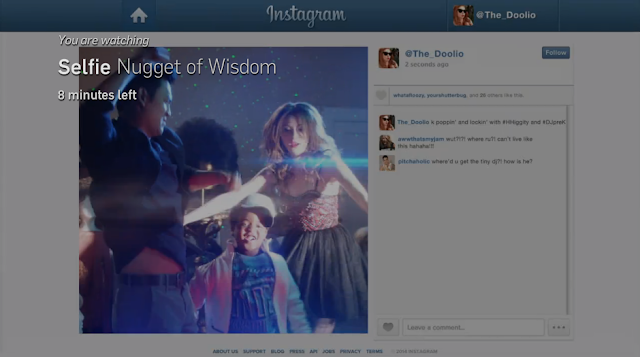 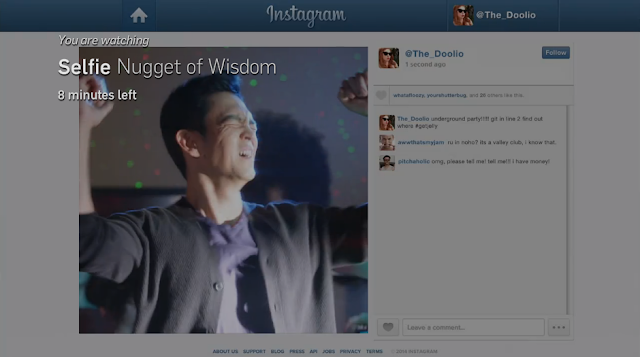 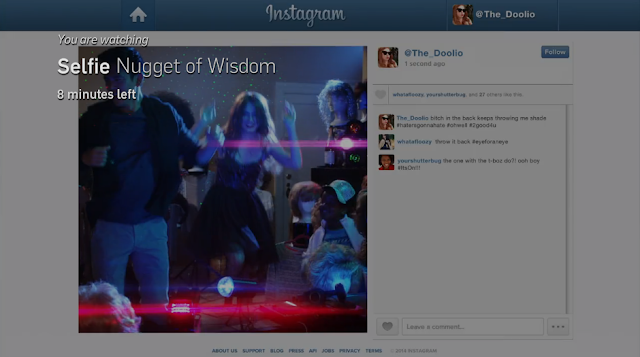 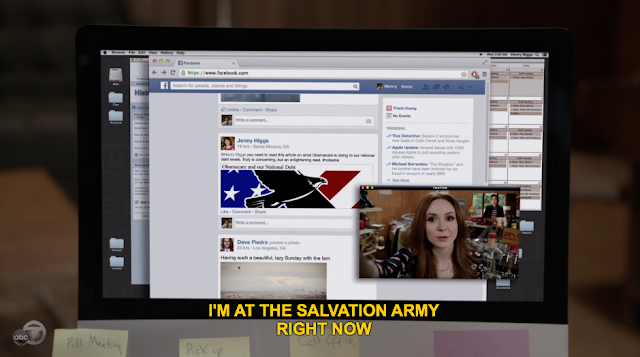 Henry Higgs' off-screen mom is every single Asian immigrant parent who stupidly parrots Republican bullshit, and I love how Selfie captured that in its Facebook screen shots. So of course, like any other non-stereotypical and genuinely funny show that nails a little aspect or two of Asian American life like that and doesn't feel like it was written by aliens from outer space who studied only clips of Long Duk Dong from Sixteen Candles or Fisher Stevens in brownface from Short Circuit on their spaceship viewscreen and think this is how all us Asian guys behave, Selfie gets cancelled.

What will you miss about Selfie, Adam? Take it away.--JJA

It Was Just a Good Show
By Adam Chau 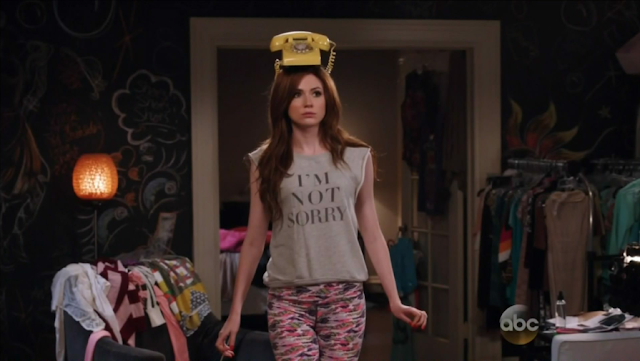 Above everything else, I just liked "Selfie." It was warm, cute, funny--I knew what to expect (from a general POV) and each week it was something I started looking forward to. It was one of those shows where I could feel myself getting more invested because at it's core, I related to it. I laughed with it. I talked to the TV when I watched it. Say what you might about how they got some things wrong--I think they got a lot more right. 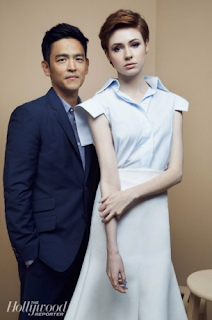 It's like the title. People have talked about the title of the show as being a part of it's downfall but how was that any worse than "The League" or "7th Heaven" or "Ally McBeal"? I'll argue that maybe it was a better title than people credited because it was too close to their faces. It's like the underground rapper that gets signed by a major label, or who's song you start hearing more of on the radio and start seeing on television. Are they any less artistic just because more people started to like them? It's easy to write "Selfie" off as a pop-culture-in-the-now-epm style title but when you think about why we do it, the overall arc of picture taking in general, and then what we do with them in the connected world from a larger social networking perspective with more connections and more spheres of influence--it stood on it's own.

I think that's the thing that gets me the most about the cancelling of "Selfie" is that it just wasn't appreciated and it could have been a great hit--for someone. Maybe not for ABC. But for someone. Because we loved Eliza. We loved Henry. They weren't perfect. They had their quirks. But so do we. And that's why we watch. Because we can relate. Because we've all jumped in the lake, or wanted to, at least once in our lives, or did the occasional "Hmm...I wonder what they're up to now..." searches and from that POV "Selfie" really did offer storylines that multiple different groups could relate to. I'll miss that piece of the show where I'm not just watching something that interests me or keeps my attention, but that also references some of my everyday life (versus something like "Storage Wars" which I occasionally like to watch but that has nothing to do with my daily life). 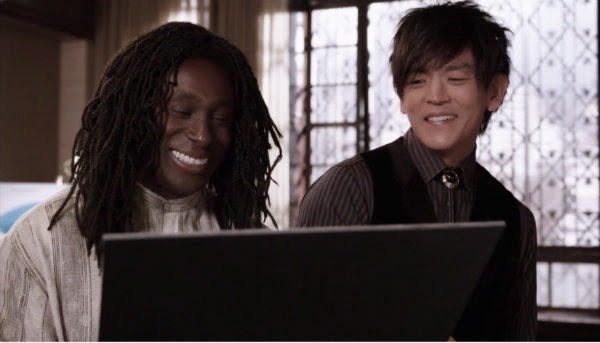 And absolutely, I will lament not being able to watch a show with John Cho as the lead because he's just a good actor who I like to watch on the screen, big or small. Almost every year he's in a new movie while at the same time also working in television. It's not just me. Other people like him too, and he was a recognizable face that anchored the show for millions of people that tuned in.