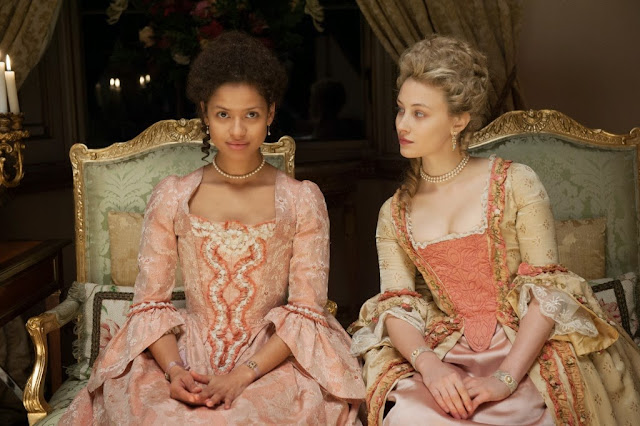 I haven't seen Belle yet, but I intend to do so either soon or via Netflix when it hits Blu-ray because it received mostly positive reviews. Jane Austen-type material usually makes my eyes glaze over. But my lack of interest in Austen-type costume dramas suddenly disappears when the star of the film is beautiful Gugu Mbatha-Raw (her first name is, by the way, short for "Gugulethu," which means "our pride" in Zulu), who was the main reason why the failed spy show Undercovers was briefly worth watching, and when the subject matter--the abolitionist movement--is told from a black woman's perspective for a change and is written and directed by black filmmakers.

Belle also happens to be the type of film I like to spotlight during "The Whitest Block Ever" on AFOS: a quality work (or in the cases of Justin Lin's Fast and the Furious sequels or Rusty Cundieff's Tales from the Hood, an enjoyable B-movie) made by a director of color. In Belle's case, the director of color is female: Amma Asante, a former child actor from British TV who made the transition to filmmaking. Belle is Asante's second feature film, and it's the story of a real-life figure, 18th-century British aristocrat Dido Elizabeth Belle, the illegitimate daughter of a British admiral and an African slave.

"Last year saw a flurry of high-profile films with (male) black protagonists (12 Years a Slave, Mandela, Fruitvale Station, The Butler and 42), and the wonderful thing about Asante's carefully constructed film is that it's not a story grounded in black suffering," wrote film critic Inkoo Kang.


Belle is Asante's attempt to prove that filmmakers of color can pull off the corset dramas too. As the BAFTA Award-winning Austen fan told Kang, "The idea of restricting us--'OK, you guys are great at urban movies. You guys are great at comedies'--I wanted to show how shallow that view is."