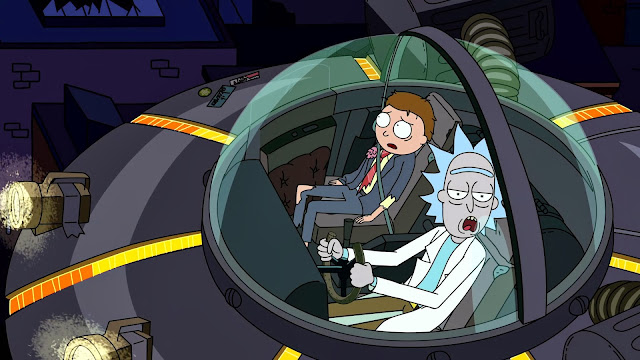 The recently renewed Rick and Morty started out as Justin Roiland's profane riff on the friendship between Doc Brown and Marty McFly in the Back to the Future movies (and now stage musical?!--why?!). With the addition of Dan Harmon to Roiland's vision, it's morphed into a dark--and unmistakably Adult Swim--take on the well-traveled heroes of both The Hitchhiker's Guide to the Galaxy, which Harmon grew up reading, and Doctor Who, which Harmon references on Community in the form of the fictional show Inspector Spacetime (even composer Ryan Elder's Rick and Morty theme tune is sort of a takeoff on Murray Gold's updated arrangement of the old Doctor Who theme during modern Doctor Who's first three seasons).

Modern Doctor Who has sometimes attempted to explore what happens when the Doctor winds up making things worse rather than making them better (like what Russell T. Davies did with the 10th Doctor during the classic bottle episode "Midnight"), but on Rick and Morty, Harmon wants to go a step further and see what it's like when you strip away the whimsy, the heroism, the ultra-competence, the pacifism and all the other comforting things that make the Doctor such a beloved part of the family-friendly half of British TV. For instance, what if Ford Prefect--who was basically a Douglas Adams clone of the Doctor--was responsible for the destruction of Earth instead of the aliens who blew it up to make way for a "hyperspace bypass" that's under construction? Or what if the Doctor was a total sociopath and instead of saving lives and trying to avoid violence as much as possible, he didn't mind resorting to murder, which is how Rick handled an alien who attempted to molest his grandson last week in "Meeseeks and Destroy"?

This week, in "Rick Potion #9," which is credited solely to Roiland, Rick and Morty does an inspired--and thanks to all the David Cronenbergian body horror imagery, delightfully grotesque--spin on "What if the Doctor's scientific expertise kept ruining everything and plunged Earth into an apocalypse?" I love how the apocalypse is the result of an experimental love potion that was lying around Rick's lab like some unread indie comic I bought at APE in Sucka Free about a half a decade ago but have never gotten around to flipping through and is gathering more dust than a "Which racial terms are not allowed to be said on the air?" manual at the offices of Fox News.

Morty uses the potion to get Jessica, the classmate whose breasteses he dreamt about caressing in the pilot, to fall for him at their school's Flu Season Dance. But of course, the potion, which Rick warns Morty not to use on her if she has the flu, goes wrong when it's combined with Jessica's flu microbes and it ends up infecting everyone else at the dance. So in addition to both female and male classmates wanting Morty's body, all the faculty members become infatuated with Morty as well. Soon the rest of the world follows suit, except for Morty's loved ones, who are immune to the effects of Rick's potion because Rick's not much of a fan of incest, whether it takes place inside Morty's math teacher's pervy dream world or at 9pm on Sundays on HBO. 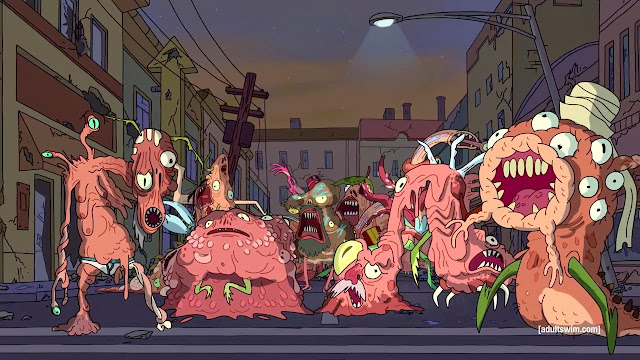 Each of Rick's attempts to undo the potion's effects results in the rest of Earth's population experiencing different stages of mutations, one more horrible than the next. Rick's Cronenberging of the world gets so bad that he starts referring to all the mutated humans as "Cronenbergs." Only when the world's in complete shambles does a loser like Morty's dad Jerry get his chance to step up and take charge, and while he and his wife Beth's transformations into trigger-happy, post-apocalyptic action heroes are full of badass lines delivered with Ash from Evil Dead II-style aplomb by Chris Parnell and Sarah Chalke, it feels a little repetitive coming right after Jerry's victory with his revamped golf swing in "Meeseeks and Destroy."

"Rick Potion #9" was actually the first episode (after the pilot) that Harmon, Roiland and the other voice actors worked on, but Harmon and Roiland pushed it back to halfway through the first season because they felt it made more sense to air it at this later point. So while the change in air order results in a character who was previously established as an eternal fuck-up turning into a winner two episodes in a row, the decision to delay "Rick Potion #9" also makes the episode's downbeat final scene--soundtracked to the funereal strains of Mazzy Star's "Look on Down from the Bridge," a song that was also used on The Sopranos--much more powerful.

Rick's ultimate solution to all his previous mistakes is the kind of deus ex machina I don't think I've ever seen before in sci-fi, and it's another example of how brilliantly plotted Rick and Morty has been each week. With his portal gun, Rick simply abandons the monster-infested Earth he's inadvertently created and takes Morty with him to an alternate--and completely identical--Earth where they can start anew and replace that Earth's Rick and Morty, who died in a lab experiment without either Beth, Jerry or Summer to see them perish. Rick uses his portal technology to pinpoint the exact moment when their alternate counterparts died so that he and Morty can immediately bury their counterparts' corpses and take over their identities without Beth, Jerry and Summer noticing.

The act of burying his own horribly mangled corpse in the soil does such a number on Morty's psyche that all Morty can do afterward is sit silently in a shocked daze, not to mention the fact that he's surrounded by a family that looks and behaves exactly like the one he's spent all his life with (alt-Beth and alt-Jerry argue just like Beth and Jerry do; alt-Summer is glued to her phone just like Summer), but it isn't the same one he's spent all his life with. Meanwhile, Rick, with booze in hand, of course, nonchalantly eases his way into this alt-Earth as if he's done it a million times before. In one of the most memorable lines in GoldenEye, the Sean Bean character attempts to cut 007 down to size by telling him that he knocks back martinis to silence the screams of the men he's killed. I wouldn't be surprised if the booze similarly helps Rick to dull the remorse that Morty is now feeling and that I imagine a younger Rick must have felt too when he first encountered crazy situations like this.


This eerie and dramatic conclusion to a comedically chaotic episode would have felt heavy-handed had Adult Swim aired "Rick Potion #9" right after the pilot. But reshuffling the episode order--so that "Rick Potion #9" takes place after the Inception-esque mind-fuckery in both "Lawnmower Dog" and "M. Night Shyam-Aliens!," Morty's disgust over killing his loved ones' demonically possessed alternate reality clones and his near-brush with sexual assault inside that men's room--makes Morty's concluding expression of both despair and exhaustion resonate more. Because Rick and Morty isn't a serialized comedy, I wouldn't be surprised if the show never addresses the change in universes again and presses on as if nothing drastic happened. But that look of despair raises a bunch of questions about the rest of the season. Is Morty starting to wish for a life away from Rick? Does Rick even care about the destruction he leaves behind wherever he goes? Could he be an even bigger monster than the Cronenbergs he created back in the old universe?

By its second season, The Venture Bros. grew from being a Jonny Quest parody to something much richer. With the one-two punch of "Meeseeks and Destroy" and now "Rick Potion #9," Rick and Morty is already showing signs of doing the same thing: outgrowing its Doctor Who parody trappings to become its own animal, a lot more ferocious--and frequently funnier--than the classic that inspired it.

Memorable quotes:
* "The Flu Season Dance is about awareness, not celebration. You don't bring dead babies to Passover." 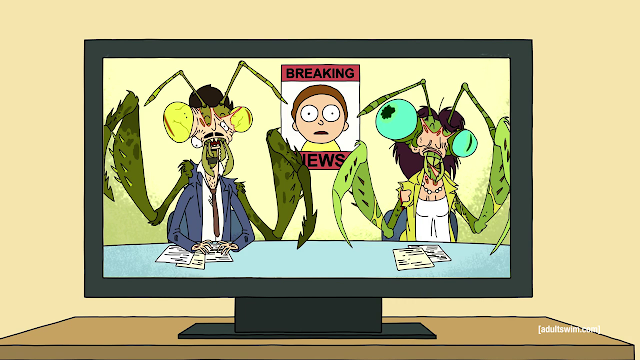 * When Morty accuses Rick of being way more irresponsible than him, Rick's dismissal of love potions as being nothing more than roofies is so damn terrific: "All I wanted you to do was hand me a screwdriver, Morty. You're the one who wanted to me... wanted me to... buckle down and make you up a... roofie juice serum so you could roofie that poor girl at your school. I mean, w-w-w-w-w-a-are you kidding me, Morty? You're gonna try to take the high road on this one? Y-y-you're a little creep, Morty. Y-y-you're-you're just a little creepy creep person."

* And now, some pre-makeout banter that would never be uttered on Doctor Who: "I wish that shotgun was my penis." "If it were, you could call me Ernest Hemingway." "I don't get it, and I don't need to."
Posted by J. John Aquino at 10:35 AM