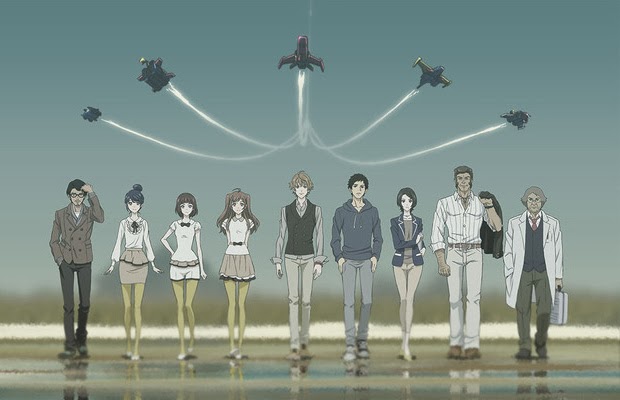 I hate breaking down TV shows or movies as "it's this plus this (minus that)." But sometimes it's the only way to explain shit. In the first couple of episodes that Crunchyroll.com allowed non-subscribers to stream in their entirety, the animated Japanese showbiz satire Samurai Flamenco, the charming and enjoyably understated creation of writer Hideyuki Kurata and director Takahiro Omori, is basically the Captain Freedom wanna-be superhero arc from Hill Street Blues plus Kick-Ass (minus the fascism, racism and shock value of the Kick-Ass comics).

But I have a feeling that in the next few weeks, Samurai Flamenco will develop into something more nuanced and complicated than that equation. That feeling is due to how surprisingly grounded and subdued Samurai Flamenco's sense of humor has been--and how observant and dead-on the show has been about Japanese showbiz--as it revolves around Masayoshi Hazama (Toshiki Masuda), an idealistic 19-year-old male fashion model who suits up as the titular costumed avenger. He wants to become a superhero just like Harakiri Sunshine or the Money Rangers, the colorful heroes of the live-action Japanese superhero shows he's adored since he was a kid. But how's that possible in a complicated world where superpowers are impossible to acquire and injustice is everywhere, except it's not on such a melodramatic level--it's more on the level of quieter and more mundane mishaps like misplacing an umbrella or unfairly losing a job--and costumed supervillains who cackle loudly about their misdeeds exist only in manga or on TV? 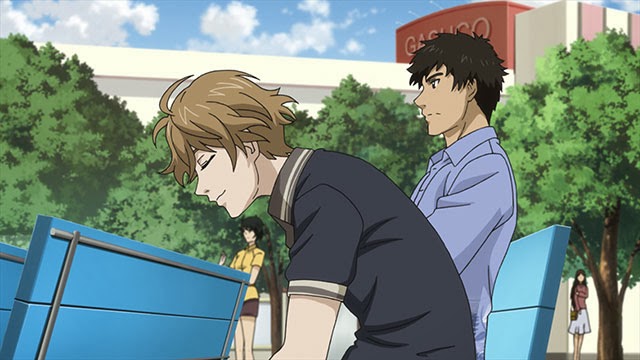 Our surrogate into Hazama's slightly warped but well-meaning fantasy world is Hidenori Goto (Tomokazu Sugita), a 24-year-old--and already burnt-out--uniformed police officer whose law enforcement experiences have been closer to Barney Miller than the Lethal Weapon/Bad Boys/Hot Fuzz vision of law enforcement: in other words, lots of sitting around in between responding to reports of minor offenses like jaywalking. One night while off-duty, Goto first encounters Hazama in an alleyway, hiding behind trash cans without any clothes on after his Samurai Flamenco costume was torn during a skirmish with some schlub Hazama tried to apprehend for smoking in a non-smoking area. Hazama thinks that if he first focuses his crusade on pursuing smokers who ignore non-smoking signs and jaywalkers, he'll be able to move onto bigger fish. The problem is that Hazama isn't exactly good at this costumed vigilante thing. He gets beat up by a bunch of middle-schoolers in the premiere episode "Debut of Samurai Flamenco!" That's how terrible Hazama is at crimefighting.

Although Goto is aware that his bumbling new friend--and drinking buddy who, of course, refuses to drink--isn't right in the head and he isn't quite on board with Hazama's worldview that you shouldn't settle for curry udon when what you really want is curry rice, the cynical cop decides to help Hazama out on his crusade. Hazama is going to need more of Goto's help now that Samurai Flamenco has become a social media phenomenon. Video footage of him trying to retrieve Goto's inadvertently stolen umbrella goes viral in the same way that the world first learned about Kick-Ass, except in an amusing touch that separates this grounded show from the smug power fantasies of Kick-Ass, Samurai Flamenco barely does anything superheroic or physical in the video. 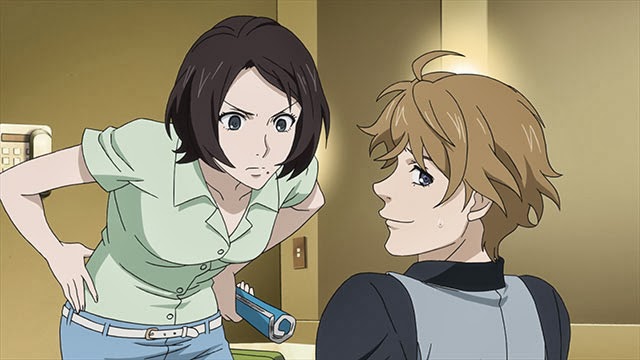 Everyone, including Mari Maya (Haruka Tomatsu), a member of a J-pop girl group, and Sumi Ishihara (Chie Nakamura), Hazama's easily exasperated manager from his modeling agency, is attempting to figure out Samurai Flamenco's secret identity--unlike Lois Lane, Sumi isn't blind and has a feeling that he could really be Hazama, but she's hoping it's not true--and now in "Flamenco vs. Fake Flamenco," Joji Kaname (Jurota Kosugi), the muscle-bound star of one of Hazama's favorite superhero shows, Red Axe the Armored God, sees the Samurai Flamenco craze as an opportunity to resuscitate his buzzless-of-late showbiz career. The producers of a Japanese panel show round up Hazama, who's afraid of being unmasked, and a bunch of other celebrities who have also been suspected of being Samurai Flamenco for a special broadcast in which they intend to both reveal which of their panel guests is secretly Samurai Flamenco and give him a reward of one million yen, but then in swoops Kaname, who takes down a bunch of masked stuntmen in front of the studio audience. He unmasks himself to the audience while clad in a better-looking version of the Samurai Flamenco costume that was created for Hazama by a fashion designer he knows. Hazama is stunned and unsure how to handle the fact that he's become a victim of identity theft by one of his action show idols, while Goto, who's no stranger to dealing with liars due to his job as a cop, doesn't care for this self-serving imposter who comes up with lies about creating Samurai Flamenco just to further his career.

If this were 30 Rock or It's Always Sunny in Philadelphia, both live-action comedies that are actually more cartoonish than Samurai Flamenco, Kaname would be a total asshole and a one-note antagonist (adversarial guest characters were never the strong point of those two shows, McPoyle siblings aside). But we get a tip-off that Kaname is actually an all-around good guy--and isn't going to antagonize Hazama for too long--when we see him leafing through his dwindling fan mail in front of his manager, who, instead of being a sleazy showbiz piranha, is an unassuming lady who's much older than either Sumi or Kaname and whom Kaname has clearly been loyal to for a couple of decades. A much jerkier TV star would have dumped her ass a long time ago. Before I watched "Flamenco vs. Fake Flamenco," I didn't pay much attention to the Samurai Flamenco key art and opening credits, which both feature Kaname, so I was surprised by how well the episode integrates Kaname into the cast and establishes that he's going to wind up instead as a mentor of sorts for Hazama, who could use much more of the fighting skills Kaname displayed each week on Red Axe. "Flamenco vs. Fake Flamenco" also comes up with a clever way to shut down Sumi's attempt to find out if Samurai Flamenco is really her own client without making me throw up my hands in frustration. 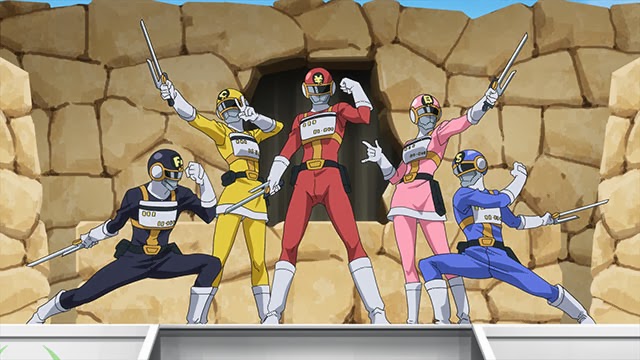 The artwork and animation on Samurai Flamenco are well-done--I especially like the attention to detail in the footage of superheroes and rubber-suited villains from Harakiri Sunshine, Money Rangers and Red Axe--but an even more impressive aspect of Samurai Flamenco is the lack of fan service, that fixture of anime where a panty shot (Kill la Kill was all about that this week), a little sideboob, some jiggle action or a shower scene is thrown in to appease fanboys even though it has shit to do with the story. Hazama's attractive manager is actually fully dressed on this show. Samurai Flamenco is clearly written for grown-ups who have matured past watching anime mostly for fan service and are hungry for something even more substantial than curry rice.
Posted by J. John Aquino at 5:50 PM