5-Piece Cartoon Dinner Extra: Back to the Futurama past (with former Futurama assistant director A.L. Baroza) 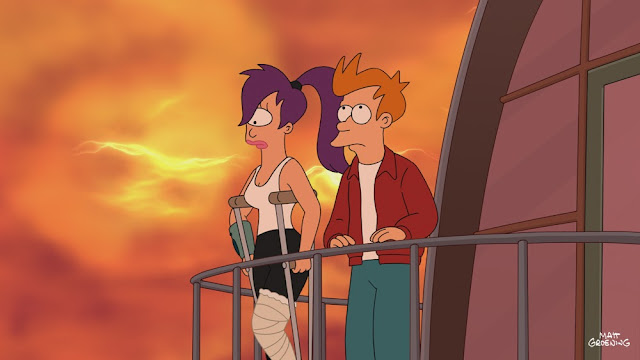 Tonight, Futurama, which premiered on March 28, 1999 on Fox, airs its final episode on Comedy Central, the network that--to the delight of fans of the animated cult favorite and its direct-to-video, post-Fox cancellation spinoff movies--brought Futurama back to series form in 2010. For those who have been frozen in a cryogenic tube in the last few years, Futurama is about a 20th century pizza delivery boy named Fry (Billy West), a stranger in a strange land called the 31st century.

Helping Fry to continually adjust to 31st century life after his awakening from an accidental cryogenic sleep are his 173-year-old descendant, the unsurprisingly exposition-y Professor Farnsworth (also West), a boozy robot roommate named Bender (John DiMaggio) and Leela (Katey Sagal), a one-eyed, karate-chopping delivery ship captain who was raised in an "orphanarium." Several things have kept Futurama from being a lame retread of The Jetsons, which it appeared to be at first: the misanthropic brand of humor of Life in Hell and Simpsons mastermind Matt Groening, who co-created the show with writer David X. Cohen, gorgeous state-of-the-art animation and some brilliantly written episodes that, in addition to being genuinely funny, also hold up as solid and cerebral sci-fi, particularly "Godfellas," "The Late Philip J. Fry" and the surprisingly moving "Jurassic Bark."

And then there are episodes that are just plain funny from start to finish, like "Where No Fan Has Gone Before." An homage to Fry's favorite show, the original Star Trek, 2002's "Where No Fan" somehow managed to get the voices of nearly all the surviving (and still-bickering) '60s Trek cast members together in the same episode, if not the same recording booth (the only surviving cast member who sat out the episode was the late James Doohan, whose refusal to participate resulted in a couple of great gags about a Doohan replacement named Welshie).

Animated comedy shows aren't exactly known for bringing great change and upheaval to their characters' lives and making such a thing permanent (for instance, you'll never see Bart, Lisa and Maggie age, unless it's a DC Elseworlds-style Simpsons episode about an alternate future), and Futurama was no exception. Even through all the countless body (or brain) transformations and deaths they've experienced, the Planet Express crew has remained fundamentally the same: Fry's still lazy, Bender always looks out for number one, Leela's always more sensible than the other two, Amy Wong (Lauren Tom) bangs anything that moves, as long as they're not Asian (a young Asian woman on a white show who's scripted to bone everybody except Asian guys--how surprising!), and so on.

But there's one story thread on Futurama that's evolved over the years, and it's the relationship between Fry and his fellow misfit Leela. Their gradual romance (which became an official thing in the Comedy Central years) was the focus of what was thought to have been the final Futurama episode when the series aired on Fox, and it's once again the focus of the this-time-for-real series finale. Many Futurama viewers think the show has lost some of its luster writing-wise--which often happens to shows that go past five seasons--so tonight, will Futurama go out in high style and win back those viewers?

Shortly before Futurama takes its bow for the third and most likely final time, I got A.L. Baroza, an assistant director and storyboard artist on the show during its Comedy Central run, to recall to me his five favorite Futurama episodes that he worked on. Not surprisingly, one of them involved an elaborate mechanical killing machine sequence that also happens to be one of my favorite pieces of animation the show has ever done. After Futurama wrapped up production, A.L. has moved on to storyboarding Fox's Axe Cop, based on the Nicolle brothers' completely nonsensical superhero comic of the same name.

"The Tip of the Zoidberg" (season 6, episode production number 6ACV18; aired August 18, 2011)
"In the earlier episode 'The Duh-Vinci Code,' I storyboarded this Rube Goldberg sequence where Fry and the Prof get launched into space from the Parthenon. I guess the Futurama powers-that-be must have liked it since in 'Tip,' I got the Murderlator sequence, which is a Rube Goldberg machine that pretty much took up an entire act of the script. It was the hardest storyboard sequence to board in my entire animation career. Although it was a somewhat painful experience, it was worth it, in no small part due to the CGI crew at Rough Draft Glendale, who modeled some (but not all!) of the Murderlator sequence. And the episode was nominated for an Emmy!" 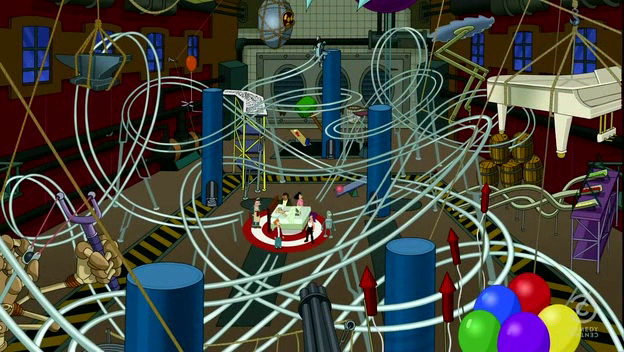 "Overclockwise" (season 6, episode production number 6ACV25; aired September 1, 2011)
"I enjoyed doing the Cosmically Aware Bender stuff where I could bring all my years of reading Jack Kirby and Jim Starlin comics to good use. Alternately, I loved doing the extended take of Fry and Leela that closed out the episode, just two characters acting and reacting silently. I love doing scenes that give viewers the feels, as the kids call it these days." 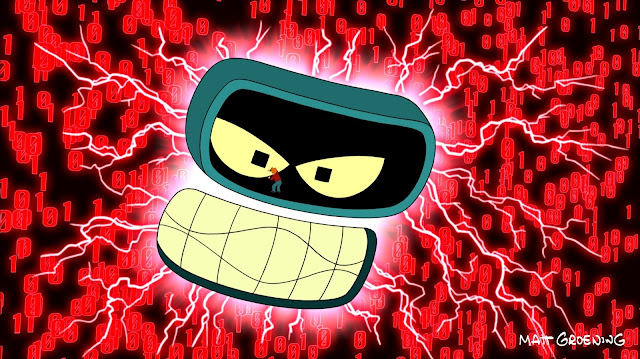 "A Farewell to Arms" (season 7, episode production number 7ACV02; aired June 20, 2012)
"In terms of sheer scale, the biggest Futurama episode I worked on. It really was epic. What was originally meant to be a cameo of George Takei's head ended up being a last-minute substitution for Washbucket, Scruffy's unrequited love. But what I'll remember most about the episode is Matt Groening's insistence that Fry and Leela's arm bone stumps not look too cartoony! I hope we satisfied his jones for anatomical accuracy." 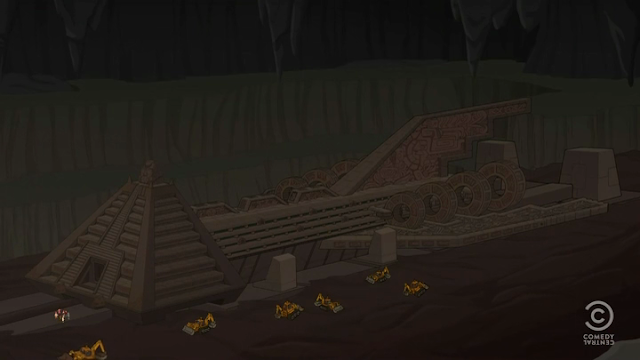 "2-D Blacktop" (season 7, episode production number 7ACV15; aired June 19, 2013)
"Loved doing the chase and race sequences; got to watch all the Fast and Furious movies for reference, which was a treat in itself. Kudos again to the Rough Draft CGI crew, who really outdid themselves for that one. Finally, I have to mention what might be the greatest stealth abstract gag ever, in the form of the character Minx, who suffered from unspoken verbal abuse!"


"Assie Come Home" (season 7, episode production number 7ACV21; aired July 31, 2013)
"Simply the funniest episode of the eight I worked on in seasons 6 and 7. My design for Tarquin, the little lighthouse keeper with barnacles on his head, pretty much remained intact." 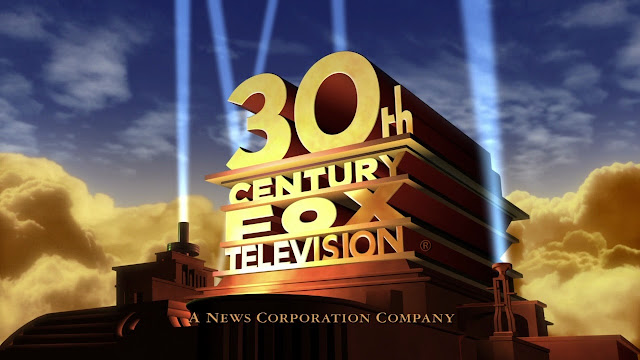 "5-Piece Cartoon Dinner" returns in October.
Posted by J. John Aquino at 2:35 AM