"'Kid' spelled backwards describes you best": A look at each track in the newest "Whitest Block Ever" playlist on AFOS 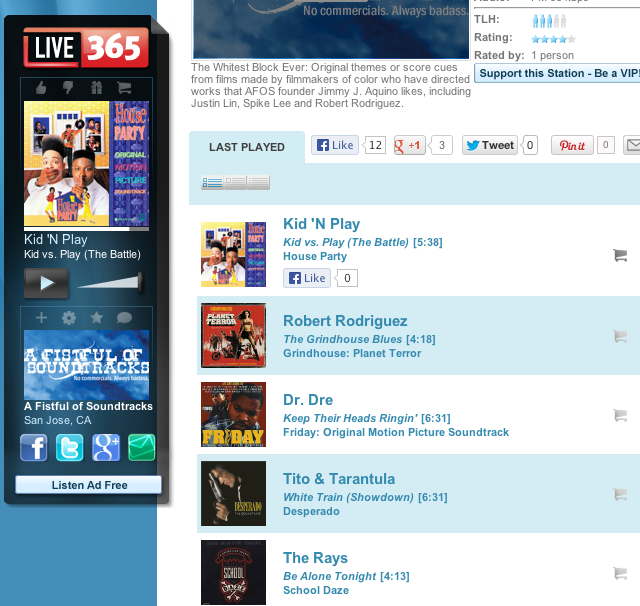 "The Whitest Block Ever," a new AFOS block that I added to the station schedule as a way to mark Asian American and Pacific Islander Heritage Month (the block will remain on the schedule after May), is actually made up of five different one-hour playlists (and hopefully six, if Live365 hard drive space will allow it, and perhaps with an original track from Furious 6). All five playlists contain original themes and score cues from films done by Asian American directors and other filmmakers of color who have worked on films or TV series episodes I've dug or admired. "The Whitest Block Ever" airs every weekday at 10am-noon on AFOS.

Last week, I finished assembling the fifth playlist, a.k.a. "TheWhitestBlockEver05" (all the tracks in "TheWhitestBlockEver05" are streamed only during the "Whitest Block Ever" block and nowhere else on the station schedule, in order to reduce repetition). I enjoyed reading the replies Edgar Wright and "Whitest Block Ever" playlist fixture Robert Rodriguez gave to Empire magazine about their favorite score cues or soundtrack albums in the magazine's soundtrack tribute issue, so in a fashion similar to what Wright and Rodriguez did for Empire, here are descriptions of each of the 13 tracks in "TheWhitestBlockEver05."

1. Elmer Bernstein, "Prologue" (from Hoodlum)
Man, Bernstein could do it all: from slapstick vehicles for SNL alums like Trading Places and Ghostbusters to Harlem period pieces like the Bill Duke films A Rage in Harlem and Hoodlum. The ondes Martenot, an electronic instrument that Bernstein utilized most memorably in his Ghostbusters score and can easily be mistaken for a theremin, pops up in "Prologue" too and was used to great effect to represent an era of Harlem gone by.

2. Keisa Brown, "Five on the Black Hand Side" (from Five on the Black Hand Side)
I've seen only bits and pieces of this 1973 film, which has an enjoyable opening theme penned by legendary Capitol Records soul arranger H.B. Barnum and an equally enjoyable shot-on-a-shoestring trailer. The marketing for Five on the Black Hand Side brashly asserted that the film, an adaptation of a comedic stage play about the clash between Afrocentricism and black conservatives, was an alternative to the violent blaxploitation fare that was popular at the time of the film's release. "You've been Coffy-tized, Blacula-rized and Superfly-ed. You've been Mack-ed, Hammer-ed, Slaughter-ed and Shaft-ed. Now we wanna turn you on to some brand new jive," proclaims Fun Loving (Tchaka Almoravids) in the trailer. "You're gonna be glorified, unified and filled with pride when you see Five on the Black Hand Side."

3. Kid 'N Play, "Kid vs. Play (The Battle)" (from House Party)
I wish the Obama/Romney and Biden/Ryan debates were more like the freestyle battle scenes in 8 Mile and House Party. 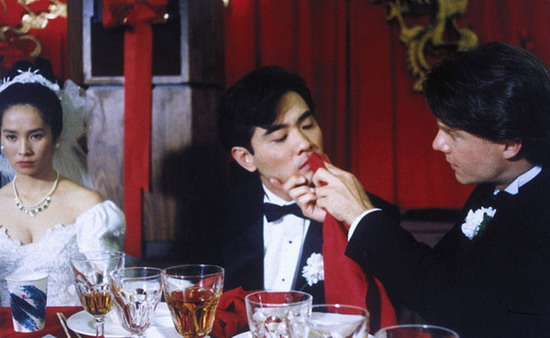 4. Mader, "Rhumba (End Credits)" (from The Wedding Banquet)
Gentle-humored comedies about generational discord within families (or survival dramas about orphans who find unlikely surrogate families in the form of tigers) are where Taiwanese-born Ang Lee, this year's Best Director Oscar winner for Life of Pi, works best, not action material that calls for a nimbler touch from someone like Tsui Hark or Joss Whedon, like Lee's 2003 misfire Hulk. (As Stop Smiling said in its amusing evisceration of the two pre-Mark Ruffalo Hulk movies, "Lee shouldn’t do pop; his attempts to 'enliven' the material and make it more like a comic book with screen panels and visible page breaks was the cinematic equivalent of Karl Rove dancing.") Over a decade before he won his first Oscar for directing Brokeback Mountain, Lee tackled LGBT characters in The Wedding Banquet, a standout piece of Asian American indie cinema about Wai-Tung (Winston Chao), a Taiwanese American landlord who, with the prodding of his boyfriend Simon (Mitchell Lichtenstein), marries Wei-Wei (May Chin), a struggling Chinese artist, to enable her to get a green card and to satisfy his traditionalist parents from Taiwan. I feel like The Wedding Banquet has kind of been overlooked during this Brokeback/Life of Pi period of Lee's career, despite having been the most profitable film of 1993, even more so than Jurassic Park (it also went on to spawn a stage musical version in 2003). On paper, The Wedding Banquet reads like a shitty sitcom. But the film is far from being such a thing, thanks to Lee's thoughtful and low-key direction, which is aided by French-born composer Mader's equally low-key score, a mishmash of Chinese and Latin sounds that (spoilers!) mirrors how the future child of Wai-Tung, Simon and Wei-Wei will grow up to be a mishmash of various cultural influences.

5. Melba Moore, "Black Enough" (from Cotton Comes to Harlem)
I had no idea Galt MacDermot, one of the most frequently sampled composers in hip-hop, scored Cotton Comes to Harlem until recently. I've seen the Ossie Davis-directed adaptation of the Chester Himes novel of the same name two or three times, but that was before I became interested in finding out where beatmakers copped so many of their illest samples from (it's also kind of hard to notice MacDermot's musical trademarks during Cotton Comes to Harlem when all your 19-year-old self can think about is the film's T&A, like Judy Pace's T&A when she ducks out of being kept under watch by a dumb white cop by craftily tricking him into bed without sleeping with him). One of my favorite MacDermot samples takes place during 9th Wonder & Buckshot's "Shinin' Y'all," which loops "Sunlight Shining," a tune that happens to come from Cotton Comes to Harlem. I'd like to see some beathead make use of another Cotton Comes to Harlem joint, "Black Enough," the film's opening theme, which, like "Sunlight Shining," is filled with soothing strings and classic MacDermot beats.

6. Michael Jackson, "On the Line" (from Get on the Bus)
It's been a few years since I watched Spike Lee's Million Man March-themed Get on the Bus, so I forgot that Michael Jackson sung the film's opening title theme, which contains lyrics about overcoming self-hatred that bring to mind the Five on the Black Hand Side theme (and the Jackson theme was produced by Babyface too!). "On the Line" is, along with "Butterflies" and maybe the Teddy Riley-produced "Remember the Time," one of the few tunes from Jackson's post-Bad, extremely treacly "won't someone think of the children?" era that I actually like. The fact that "On the Line" is--like Everybody Loves Raymond used to say at the start of each episode--not really about the kids also helps.

7. New Human Formantics, "I'm Just a Human" (from Fear of a Black Hat)
In the 1993 mockumentary Fear of a Black Hat, future Chappelle's Show director Rusty Cundieff poked fun at the excesses of gangsta rap, as well as hood flicks and various early '90s R&B trends. The funniest of Fear of a Black Hat's fake tunes has to be ex-N.W.H. member Tone Def's solo effort "I'm Just a Human," a spoof of the New Age rap duo P.M. Dawn's 1991 hit "Set Adrift on Memory Bliss" (that's Mark Christopher Lawrence, a.k.a. Big Mike from Chuck, as Tone Def, espousing his Stephen Colbert-style "I don't see color" philosophy to the interviewer character played by future Talk to Me director Kasi Lemmons). A plea for racial tolerance ("You are just like me/I'm just a human") morphs into one of the most delightfully disgusting songs ever written ("'Cause black, white, yellow, red, brown or gold/Our shit all comes from the same little hole"). And as a bonus, the album version of "I'm Just a Human" gets even more delightfully disgusting ("Sometimes I smell the lint from my belly button/How could something so small make a stench so rotten?"). 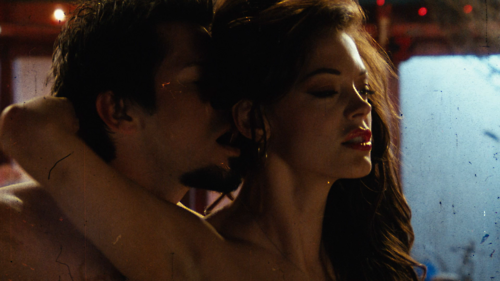 9. Robert Rodriguez, "The Grindhouse Blues" (from Planet Terror)
Here's a YouTube comment on "The Grindhouse Blues," a source cue during a restaurant conversation in Planet Terror between ex-lovers El Wray (Freddy Rodriguez) and Cherry Darling (Rose McGowan): "Thats baby makin music, thats what that is!" I don't care for that guy's inability to apostrophize, but I agree.

10. Robert Rodriguez & Graeme Revell, "Marv" (from Sin City)
I've lost my appetite for any of Frank Miller's works ever since he went all Islamophobic, but I still like the atmospheric score Rodriguez co-wrote with Revell and John Debney for the first Sin City film he co-directed with Miller.

12. Tito & Tarantula, "White Train (Showdown)" (from Desperado)
There's an interesting tidbit about the Desperado shootout sequence that features the rousing "White Train (Showdown)." One of Antonio Banderas' backup gunmen is played by Carlos Gallardo, who starred in the Banderas role of El Mariachi in the 1992 film of the same name, so the sequence is basically a team-up of both old and new Mariachis, snuffing out hijos de putas side-by-side.


13. Dr. Dre, "Keep Their Heads Ringin'" (from Friday)
Almost forgot about Dre. Written for the endlessly quotable Friday, "Keep Their Heads Ringin'" was a huge hit for Dre in the '90s, in addition to being a really solid commercial rap track. During then-music video director F. Gary Gray's breakout feature film, the tune turns up as a source cue in the scene where a crackhead attempts to scam a liquor store out of cash by pretending to have slipped and fallen. I would rather have had two or three Friday movies with Chris Tucker and Ice Cube instead of three Rush Hours with Chris Tucker and Jackie Chan. Tucker didn't want to reprise his breakout role as Smokey when New Line wanted to move forward with Next Friday (IMDb claims it was because Tucker had become a born-again Christian and started to view the material in Friday as objectionable, while Tucker himself claims he turned down the sequel because he preferred Money Talks over Next Friday as his starring-role follow-up to the first Friday). It's a shame because Tucker was at his funniest as Smokey, while the Rush Hour franchise is pretty goddamn deplorable (I explain why here, while Yo, Is This Racist? host Andrew Ti gives basically the same explanation as I did here, although he's a little kinder to Rush Hour than I am). Something that's not as deplorable is rapper Rocky Rivera and DJ Roza's 2011 Friday Mixtape, which cops soundbites from the first Friday and occasionally has Rivera quoting Smokey. According to my iTunes playlists, I've bumped The Friday Mixtape 27 times on my MacBook. I guess I love hearing ladies quote Friday.
Posted by J. John Aquino at 11:30 AM