March Madness March of the Day: "Baraat" from Monsoon Wedding by Mychael Danna 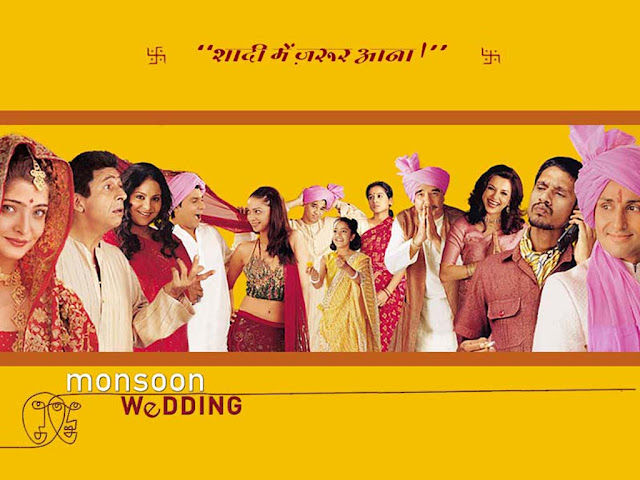 Today's "March Madness March of the Day" post is just going to be a bunch of quotes pasted together because I'm not going to pretend to be an expert on Indian music and Punjabi culture, although when I saw Monsoon Wedding at a press screening in 2002, I found its Mychael Danna-penned opening title march's New Orleans brass band-style sound to be a tremendous way to kick off the film.


I'd also like to give a shout-out to Southern White DJ Whose Radio Show Used to Follow A Fistful of Soundtracks Back When AFOS Was a College Radio Show Ages Ago and Whose Name I've Since Forgotten. Your dumb and cruel ridicule of the Indian actresses who sang the Monsoon Wedding track "Mehndi/Madhorama Pencha" while I played it at the station was one of several things that made me realize it was time to leave terrestrial radio and turn AFOS into an Internet radio station, you racist piece of shit. Thanks, Hank or Toby or Enos or whatever the hell your name was.

Danna, whose name I haven't forgotten, described the roots of "Baraat" in a summary of the theme that I found on the blog of a musician who arranged a cover of "Baraat" for his wind band and even received Danna's blessing:


Baraat is the hindi word for the wedding procession of the bridegroom to the bride's village, with the groom on horseback, surrounded by his family and friends and musicians, singing and dancing with the joy of the occasion. Traditionally, the music that would accompany this noisy journey would be the exciting rhythm of the dhol drums. But since the time of the British military brass bands, the more affluent weddings use this strange yet typically Indian absorption of marching band instruments into Indian popular songs... musical proof that outside influences will come and go, but there will always be an India. This piece was written by me in that style for Mira Nair's film Monsoon Wedding.

In a 2002 article for The Music Magazine, reviewer Surajit Bose outlined how "Baraat" forms the backbone of Danna's original score:


The liner notes [to the CD of Monsoon Wedding] reveal that Danna and his wife Aparna underwent a traditional North Indian marriage ceremony even as he was working on the music for Monsoon Wedding. Apparently this was mere serendipity, and not (alas) a symptom of Danna's fanatic devotion to researching his art. Nonetheless, Danna's first-hand familiarity with the traditional trombone-laden wedding orchestras is evident in the joyous and appropriately raucous Baraat, which serves as both the title music and the music of the baraat at the movie's eponymous close.

The melodic line established by Baraat is worked and reworked in various arrangements and at varying tempi throughout the movie, almost in the manner of a raga interpreted and reinterpreted over and over again to bring out its varied facets. Danna's creativity reveals itself in the dazzling array of orchestral arrangements, emotional effects, and musical affinities that emerge from the reworkings of a single melody...

The repetition begins to function not only as a background to the action, but also a comment on it...

The reimagining of the same melody over and over again has another, more tactical effect. Danna not only manages to relate the various characters and situations to each other, he also relates his own composition to the borrowings that pepper Monsoon Wedding. His recontextualizations of his own brand-new melody parallel the recontextualization of an old classic like "Mujhse pehlisi muhabbat". First off, Danna's own melody is credible as part of the story. The presence of a typical marriage brass band concoction like Baraat is natural enough given that the movie is, after all, about a wedding. But when that concoction recurs under various guises throughout the movie, it takes on a resonance beyond that of mere theme music. Just as with "Mujhse pehlisi muhabbat", something that could be taken for granted turns out on closer investigation to be meaningful in unexpected ways. So symbiotic is the relationship of music and action, that the music becomes the movie, as it were; the music is not a decorative add-on, but an integral part of the movie's shape, its texture and flow. It is, as Nair says, an "essential inclusion" into the life of the movie.