Stuff White People Like But This Brown Man Can't Stand #1: The vampire genre 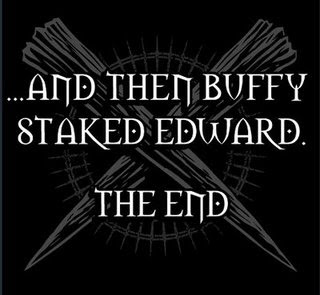 I'm so tired of the popularity of navel-gazing vampire genre franchises like Twilight, The Vampire Diaries and True Blood, which earns some points for being like an anti-Twilight because of its unabashed naughtiness, but I lost interest in the show after its first season because British-born Stephen Moyer's attempt at a Southern accent is terrible, the black characters are the racial equivalent of the overdone "gay best friend" trend, as a Newsweek writer astutely notes in "I Won't Be Seduced by True Blood," and thirdly, the show is too soapy for my tastes.

The only bloodsucker genre pieces I ever liked were the sharply written first few seasons of the Buffy TV series, its underrated Angel spinoff (the student outdid the master during the latter's underwhelming last two seasons on UPN) and John Carpenter's Vampires, which isn't one of Carpenter's best flicks, but it's redeemed by Sheryl Lee, some amusing genre-mocking dialogue from snarky, homophobic antihero James Woods ("It's not like they're a bunch of fucking fags hopping around in rented formal wear and seducing everybody in sight with cheesy Eurotrash accents, alright? Forget whatever you've seen in the movies.") and a largely unromantic portrayal of vampires.

Otherwise, if I want to watch a 200-year-old pedophile slobber over a hot chick, I'll rent a Woody Allen movie.
Posted by J. John Aquino at 10:35 AM