An Oakland Raider busts out the Carlton Dance

I'm not a fan of the Silver and Black, but the highlight of yesterday's Raiders/Texans game amused me: Raiders wide receiver Johnnie Lee Higgins* celebrated a touchdown by doing the illest shout-out to a sitcom I grew up watching. His choice for an end-zone dance was the hilarious Carlton Dance from The Fresh Prince of Bel-Air (photo by Brant Ward of the San Francisco Chronk). 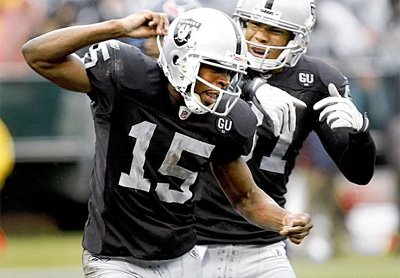 Before he played Carlton, Alfonso Ribeiro was best known for his slick dance moves on Broadway and in commercials with Michael Jackson back when he was black, so it's funny that Ribeiro's most famous dance move today is a much less slick-looking move in which he had to pretend to be a less skilled dancer. The Carlton Dance is a parody of what has to be the whitest-looking dance ever. Every rhythmically challenged white person in the '80s did it, from Bruce Springsteen and Courteney Cox in the "Dancing in the Dark" video to the clubgoers at the Tech Noir in the original Terminator. 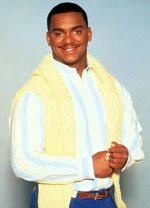 Whenever Ribeiro would bust out the Carlton Dance, everyone in the studio audience would lose their minds. Twelve years after the last time Carlton shook his ass back and forth to Tom Jones' "It's Not Unusual" on NBC, that dorky dance still makes crowds lose their minds, judging from yesterday's reactions from the Raider Nation, the TV sports reporters and the blogosphere.

* When Higgins scored another TD, he bust out what SacBee blogger Jason Jones (not the soon-to-be-ex-Daily Show correspondent) called "one of Big Daddy Kane's patented dance moves." After the game, JLH identified this second dance as the "Hooka Hooka." He also did the Humpty Dance for a TV sports reporter in the locker room. The guy's got quite an arsenal of end-zone dances. A hater said on a message board that JLH's "idiotic dances need to be penalized." Looks like Reverend Shaw wants to expand his anti-dancing crusade from Bomont to the NFL.
Posted by J. John Aquino at 7:45 AM

My writing has also appeared on Word Is Bond (byline: DJ AFOS) and Splitsider. In 2007, I came up with the premise for "Sampler," a short story in the 2009 New Press graphic novel Secret Identities: The Asian American Superhero Anthology (no relation to Image's Secret Identities).