"Brokedown Merry-Go-Round" Show of the Week: Rick and Morty, "Close Rick-Counters of the Rick Kind"

The only hackneyed thing about "Close Rick-Counters of the Rick Kind," Rick and Morty's latest brilliantly plotted round of interdimensional mayhem, has to be that episode title. The episode titling system over on Community, Rick and Morty co-creator Dan Harmon's other current show, is far more clever than Rick and Morty's titling system of late, with titles in the style of esoteric-sounding community college course names ("Cooperative Calligraphy," "Geothermal Escapism"). (Perhaps the Rick puns in each episode title--which have varied from corny to decent, like "Something Ricked This Way Comes," my favorite of the punny titles--are intentionally awful. If it's true that these titles are Harmon and Justin Roiland's joke on the lameness of most of the puns in animated show episode titles, then "Close Rick-Counters of the Rick Kind" tops them all in terms of intentional awfulness.)

Everything else about "Close Rick-Counters," a whodunit story in which Rick is framed by an unknown foe for murdering Ricks in other dimensions, is far from hackneyed, as well as an example of how much Rick and Morty has grown over the course of its first season from a fun Doctor Who parody to something richer and darker. If you take away the sci-fi trappings, the parallel universes gimmick and the gags about greasy grandma worlds or planets inhabited by chairs, Rick and Morty is fundamentally an often downbeat family comedy about the difficulties of living with a genius who does many amazing things (and has been responsible for showing his family the wonders they've seen, to borrow the opening narration of Farscape, a favorite show of Roiland's that must have influenced the dysfunctional relationships within the Smith household) but is also such a cold and unfeeling asshole. In "Close Rick-Counters," which was penned by Ryan Ridley (who also wrote the series turning point "Meeseeks and Destroy"), we see how the lack of compassion of the Ricks of the universe--or rather, various universes--pushes both Morty and Jerry close to the breaking point and has sent one of Morty's parallel counterparts way past that point. Enter the eyepatch-clad Evil Morty, the show's first formidable villain.

What exactly did the Rick in Evil Morty's universe do that caused Evil Morty, who had grown tired of being unappreciated, to go insane, murder him, take control of his brain (resulting in the minion/red herring that is Evil Rick) and then murder 26 other Ricks? What were the jerky things that Rick said to Evil Morty that made him believe that the Ricks in all the universes don't care about the Mortys? Other than the cold open, Evil Morty gets only two scenes in "Close Rick-Counters." One scene is mostly wordless, way before we know who Evil Morty really is, while the other is the final wordless scene before the end credits, and it's such an awesome reveal of both his treachery and his knack for keeping that treachery well-hidden, nicely soundtracked by Blonde Redhead's 2000 tune "For the Damaged Coda." I'm dying to see what else Evil Morty has up his sleeve, and I can't wait to see how our learning disability-afflicted Morty--or rather, Earth Morty C-137--will react when he finds out that there's a Morty who broke the mold and is as much of a genius as the Ricks.


We, of course, know that Evil Morty, for all his genius, is wrong about Rick not caring about Morty, as we see in the great little moment where C-137 Rick tears up while watching his memories of himself with Morty being projected by Evil Rick before the minion attempts to murder him. Why does Rick hide his compassion for his grandson from him?

"Maybe he wants to keep people at arms [sic] length, because it IS so normal for people to die around him," theorizes the Rick and Morty fan who runs a Tumblr called Morty and Rick. "It makes it easier, and easier to deal with the dizzying concept of there being yous in other dimensions that may be better than you, happier than you, etc."


There's one more episode left in Rick and Morty's first season. I hope the question of why Rick prefers to make himself look tough in front of Morty isn't answered for a while. Also, as Harmon said about that kind of question when he was interviewed by Alan Sepinwall about Rick and Morty, "if Rick does or says something that indicates that he doesn't care about you as a human being, is he expressing a flaw in his brain or is he more evolved than us? Or is it both?" Having Rick immediately confide to Morty about how he truly feels would go against how the show has painted Rick as a complicated human being rather than a typical '70s and '80s sitcom character who nobly speechifies about feelings and social issues and makes my eyes roll. At the same time though, I don't want to see Rick, seven or eight years from now, becoming as repetitive and tiresome an asshole genius as Gregory House became about seven seasons into House. I want to see him change a little, just like how the similarly abrasive Jeff Winger did over the course of Community's run.

On the other side of the compassion spectrum stands Earth Rick J19-Zeta-7, a.k.a. "Doofus Rick." He pales in comparison to the other Ricks who comprise the Council of Ricks, the transdimensional government that presides over all matters pertaining to the Ricks (it's also a club the bureaucracy-hating C-137 Rick refuses to join), and he's continually teased by them for hailing from the universe where people eat their own shit. But like Evil Morty, Doofus Rick is an outlier. Unlike the other Ricks, Doofus Rick's unafraid to show compassion. When he tags along with the various Ricks, who stop by the Smiths' house to investigate C-137 Rick's whereabouts, his kindness to Jerry wins over the friendless and currently unemployed advertising man, who's constantly insecure about being surrounded by a heart surgeon wife and scientist father-in-law who are smarter than him and keep giving him a hard time about his ordinariness. 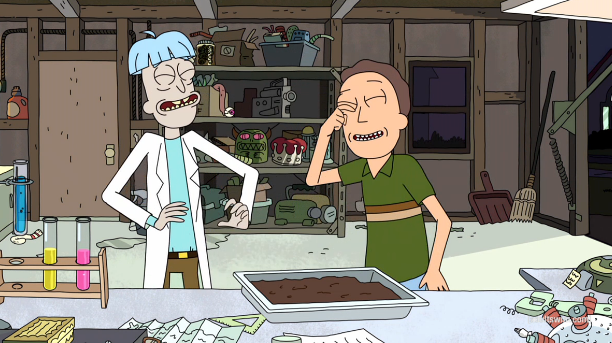 Doofus Rick doesn't ridicule Jerry for his love of collecting Star Wars coins like Beth and presumably C-137 Rick do. He says to Jerry, "You bought them because you like them. They have value to you. That's what matters," although I like how a little bit of the other Ricks' bluntness remains when he precedes that sentence with "You know, Jerry, I'm not gonna tell you that these will increase in value or even hold their current value." This B-story in which Jerry gets the nice father-in-law he always wanted--but in the form of a Rick from another dimension that has customs I kind of don't want to know more about, because of the whole shit-eating thing, which sounds like something Shailene Woodley would be into--is both poignant and amusing. The funniest part of the B-story is a gag that can easily be overlooked during first viewing: Doofus Rick's little lesson to Jerry on how to make ovenless brownies out of titanium nitrate and chlorified tartrate. Compared to regular people, Doofus Rick isn't really much of a doofus because of his scientific know-how. So because scientific things that, on paper, look simple to a Rick, whether he's C-137 Rick or Doofus Rick, are gibberish to a regular person like Jerry, he's unable to notice that Doofus Rick's tasty brownies are actually feces.

Now that we've gotten a tiny glimpse of Evil Morty, I wonder if Evil Jerry will be as pathetic as the other Jerrys we've seen so far or if he'll be as much of an evil mastermind as Evil Morty. Or is it both?

Memorable quotes:
* "Will you at least unfreeze my daughter's idiot?"

* "W-w-wherever you find people with heads up their asses, someone wants a piece of your grandpa, and a lot of versions of me on different timelines had the same problem, so a few thousand versions of me had the INGENIOUS IDEA OF BANDING TOGETHER! Like a herd of cattle or a school of fish or those people who answer questions on Yahoo! Answers."

* "Now if you'll excuse me, I've got pancakes back home with syrup on top of them. They're about to hit that critical point of syrup absorption that turns the cakes into a gross paste, and I hate to get all Andy Rooney about it, but I think we all like fluffy discs of cake with syrup on top, and I think we also like to be accused of crimes when there's evidence! So as they say in Canada, peace oot!"

* "Earth Rick C-137, the Council of Ricks sentences you to the Machine of Unspeakable Doom, which swaps your conscious and unconscious minds, rendering your fantasies pointless while everything you've known becomes impossible to grasp. Also, every 10 seconds, it stabs your balls."

* C-137 Rick, referring to a minion of Evil Rick's who comes from a planet of crab creatures and appears to be the only one chuckling from his quips: "This guy is on it!" Evil Rick: "He's not laughing at your dumb jokes, Rick. That's just a random noise it makes every 10 seconds."

* One of the imprisoned Mortys: "I'm sick of being a human shield. I-I-I w... I want to be a gardener!" Another Morty, who comes from a dimension where Rick and Morty have antennae on their heads: "I want to write really crazy intense action novels!"