This weekend's second-season finale of one of my current favorite shows, the Starz single-camera comedy Party Down, is rumored to be the series finale. The show's chances of being renewed by Starz have dimmed because it was a project that was nurtured by higher-ups who are no longer part of the channel staff, and they've been made even more dim by sucky ratings, as well as Party Down star and co-producer Adam Scott's decision to not return for another season (he became a regular on Parks and Recreation) and the decreasing availability of some of Scott's co-stars due to more stable employment opportunities that have emerged from pilot season. If Friday's finale was the last we see of the losers at Party Down Catering, it was a nice way to go out.

If you've never seen the underwatched Party Down, it's an uproarious and cynical portrayal of dog-eat-dog Hollywood, told through the eyes of cater-waiters who moonlight as actors, stage moms or underemployed screenwriters when they're not serving hors d'oeuvres to douchey showbiz bigwigs or the "blonde-haired nobodies with perky tits and bad skin" that Patton Oswalt encountered in one of the greatest things he ever wrote, a blog post about his miserable experience at an L.A. gifting suite (which I luckily saved to my computer before it was deleted from his blog). In other words, Party Down is the anti-Entourage. It's the darkest and funniest sitcom about not making it since Taxi.

The You Offend Me You Offend My Family blog does a wonderful series of posts called "Movies That Should Have Starred Asians." Party Down isn't a movie, but it belongs on that list. It's about failure and underemployment in Hollywood, and nobody's had it harder in that town than Asian American male actors, who have been stuck with some of the most demeaning roles in the biz. The one question I've had about Party Down throughout its run has been "Why is this group of struggling actors and screenwriters missing an Asian guy?" Now that the regular cast is without Scott (who's been terrific as Henry the lost soul and disillusioned actor who can't escape being recognized for his beer commercial catchphrase "Are we having fun yet?") and possibly Ryan Hansen, I'd be pissed if Party Down's yet-to-be-determined third season doesn't fill one of those empty spots with an Asian guy. (John Cho's without a TV series again. He'd be perfect on this show.)

Viewers who hate inside-showbiz sitcoms like Entourage or are tired of them will be relieved to know that not every episode of Party Down is about Hollywood (when HBO was initially interested in picking up Party Down, they pushed the creators, who include Paul Rudd--yes, that Paul Rudd--and Veronica Mars mastermind Rob Thomas, to make the project more of an inside-showbiz sitcom like so many other HBO shows, and the creators balked at having to recycle that exhausted genre, so Party Down ended up at Starz instead). In some eps, bumbling team leader Ron (Ken Marino, who along with Hansen, is one of many Veronica Mars alums who reteamed with their old boss on the new show) and his cater-waiters have found themselves working non-Hollywood functions like a young Republican club meeting or a college football star's NFL draft day party.

The show's versatile settings (and the rich material that arises from the waiters' reactions to each different setting and their encounters with the strangers they would mingle with) are among my favorite aspects of Party Down. The fact that the changing settings are really the soul of Party Down also means the show can never go stale, and it can survive the departure of a regular like Scott or Jane Lynch, who was an invaluable part of Party Down until she had to leave to join the cast of the surprise hit Glee. (Lynch's shoes have been ably filled this season by Megan Mullally as Lydia, an always cheery stage mom from outside of Hollywood whose lack of knowledge about the industry, pop culture or sexual slang like "cougars" and "bears" have resulted in some great reactions from her youngest co-workers, Martin Starr's self-described "hard sci-fi" screenwriter Roman and stand-up comic Casey, played by Lizzy Caplan, whose unexpected farewell to clothing in True Blood is the only reason to watch that show.) 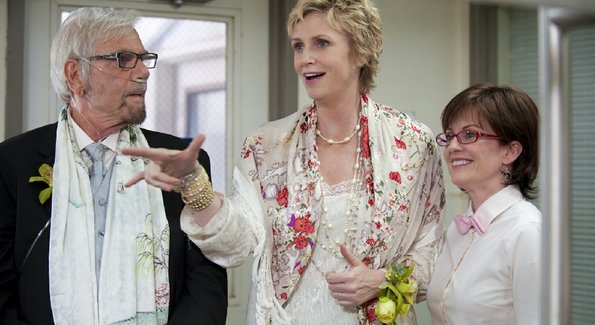 In "Constance Carmell Wedding," Lynch reprises her role as Constance--a '70s/'80s starlet whom you might barely remember from such Skinemax mainstays as Scream Weaver, Walnuts and Dingleberries--and who's now a client instead of one of the waiters of Party Down Catering, which she hires to cater her wedding to an elderly movie producer (an initially unrecognizable and sickly-looking Alex Rocco from The Godfather and The Friends of Eddie Coyle). The inevitable meeting between Constance and her replacement Lydia does not disappoint. Seeing Lynch and Mullally share the screen while their characters compete for attention from the Party Downers is like watching one of those Doctor Who eps that unite the current actor who stars as the Doctor with a previous actor who played him, except the Doctor now has a vagina.

The element I missed the most during season two due to Lynch's absence was the dynamic between Constance and Hansen's not-too-bright actor/supermodel/skirt-chaser/wannabe emo rocker character Kyle, whom Constance was often seen giving muddled showbiz advice to. Constance's interaction with this male version of her younger self--they look alike, and at times, they even think alike!--made Kyle the seemingly douchey pretty boy an even more likable character than bitter nerd Roman, whom we were tricked into sympathizing with early on in the series until we realized, "Damn, Roman is a worse asshole than the assholes he snarks about." (In a couple of nicely underplayed dramatic moments during a first-season ep, Kyle saw a group of potential drinking buddies ridicule Constance behind her back, and then he ditched them to hang out with Constance, an applause-worthy move that's a great example of the show's unpredictable and nuanced writing and must have won over viewers who thought Kyle would be a rehash of Hansen's douchey Veronica Mars character Dick Casablancas.) The finale revisits this dynamic in a hilarious wedding reception scene where Kyle and his emo band perform a song about struggle that could have been the perfect Party Down opening theme if it weren't for certain lyrics. Kyle doesn't realize his lyrics are repulsing Constance's older Jewish guests ("Yeah, they brand you a star/Put you on the midnight train/Going very far/Line you up and give you a number/Shoot you down/Throw you away/We will not surrender!") until Constance has to interrupt him to point out the questionable imagery, to which Kyle replies, "The Holo-what?"

The finale also reaches a pivotal point in the arc of a duo that's even more interesting to watch than Yoda and Luke Runwaywalker, mostly because of the chemistry between Scott and Caplan: Henry and his equally sharp-witted, on-again/off-again girlfriend Casey, who landed a bit part in a Judd Apatow movie and has been attempting to pull Henry out of his disillusionment with acting. Since it's Scott's final ep as a regular (or if the show gets axed, it's the final ep for everybody), this often downbeat show ends with a rarely seen ray of hope when Casey becomes so distraught over getting deleted from the final cut of the Apatow flick that she... nah, if you have a PC and a Netflix account, you have to go stream the finale now to see for yourself.
Posted by J. John Aquino at 8:35 PM